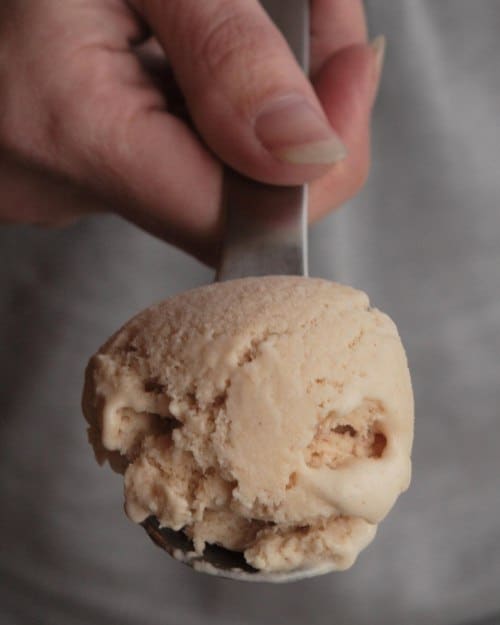 It’s the middle of May, and the weather is quite nice, a bit wet, but warmer. I think it’s time to make ice cream, to get the freezer stocked up for summer.

Of course, this is Britain, and the North of Britain at that. This may be summer.

This ice cream is based on a standard custard, flavoured with rhubarb and a small amount of cinnamon. The rhubarb is sharp and cutting, and the cinnamon adds a twinge of spice. It’s a very good ice cream, but possibly not to everybody’s taste.

Heat 300ml each of fresh whole milk and double cream in a pan with half a teaspoon of cinnamon until it just boils. Remove from the heat and set to one side to let the cinnamon flavour the milk and cream.

Cube 500g of rhubarb and heat gently with about 80g of golden caster sugar. After a time, about ten minutes, the rhubarb will have collapsed on itself and turned into a compote of sorts.

Whisk four egg yolks and 100g of golden caster sugar together until light and pale. Meanwhile, heat the milk and cream again until it’s almost, but not quite, boiling.

Very slowly, pour the hot milk and cream over the egg mixture, whisking all the time. An electric whisk is invaluable here, as is a willing helper. Keep beating. Beat like your life depends on it.

When everything is thoroughly mixed and smooth, tip the mix into a pan and gently heat, stirring constantly until the custard thickens enough to coat the back of your spoon. This will take at least ten minutes.

Add the rhubarb compote and stir well before leaving the ice cream mix to cool thoroughly. It should spend a little time in the fridge before freezing. There’s no point trying to freeze a warm mix. It’ll just get…frustrating.

Churn in an ice cream maker if you’re lucky enough to have one. Otherwise, crank up the freezer to it’s highest setting and pour the mix into a large, shallow plastic box. Place the box in the freezer for an hour or so, then beat the slushy mix with a whisk to distribute the frozen bits around. Don’t be gentle here.

Repeat this a couple more times over the next few hours, then let the ice cream freeze solid overnight.

From an easy and simple recipe on Serial Cooking. The basic custard part is a magic base, to which almost anything fruit* based can be added.

*I know, I know, rhubarb isn’t a fruit, but it is for the purposes of this post. A mere technicality.

A little corner of France in a basement in Leeds, La Grillade
Gosht Achar, or lamb curry