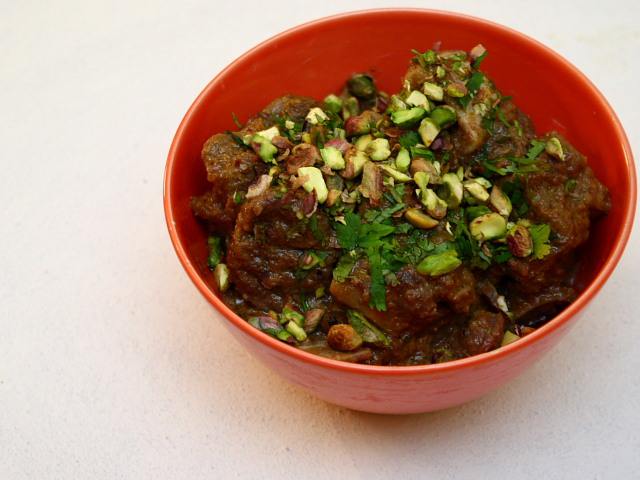 Curries made with cream have a richer, silkier feel than those made with yoghurt. The sauce tends to be reduced so that it clings to the meat, a thick coating of intensely flavoured cream encasing chunks of tender lamb or mutton.

This is a good curry for those who don’t really like the fire of a hotter curry, a madras or a vindaloo, for example. The cream tempers the heat, but there’s enough background spice there to give the meat some kick … the cream just takes the sting out of the chilli’s tail. It’s like wearing earplugs to a heavy metal gig – it’ll be loud enough for you to hear everything, but you won’t come out deaf.

This is a Madhur Jaffrey recipe (yes, I know, another one) and she makes it with boneless lamb shoulder. I used diced shoulder, but this time of mutton, and I left the bone in. It takes a little longer to cook, but the bone adds immeasurably to the flavour of the dish. It’s also trickier to eat, but such is the price of flavour.

The meat, whether lamb or mutton, needs marinading first, so put about  a kilo of meat into a large bowl and add 350ml of whipping cream, a teaspoon of cayenne pepper, two tablespoons of finely grated ginger, six cloves of garlic, crushed, and a teaspoon and a half of salt. Mix together well, cover and refrigerate for at least four hours or preferably overnight.

The cooking part is fairly straightforward. Heat some neutral oil, maybe groundnut or corn oil, in a big pan and throw in two bay leaves, two sticks of cinnamon, ten whole cardamom pods and a big, whole, dried chilli. The chilli will start to darken quickly, at which point, add two sliced onions and fry until they start to brown.

Pour the meat, cream and all into the pan, bring it the a simmer, cover and reduce the heat to the bare minimum.  Cook for between forty minutes and an hour, until the meat is nearly cooked. Stir everything around every now and again, and watch the bottom of the pan – don’t let the sauce catch and burn. If it starts to look a bit too close to doing so, add a small amount of water, just a sprinkling to keep everything moving along nicely.

Next, add a teaspoon of ground cumin, two teaspoons of ground coriander and half a teaspoon of garam masala. Cook for another fifteen or twenty minutes, uncovered, then taste, adding more salt if it needs it. The sauce should be thick and rich, reduced and smooth.