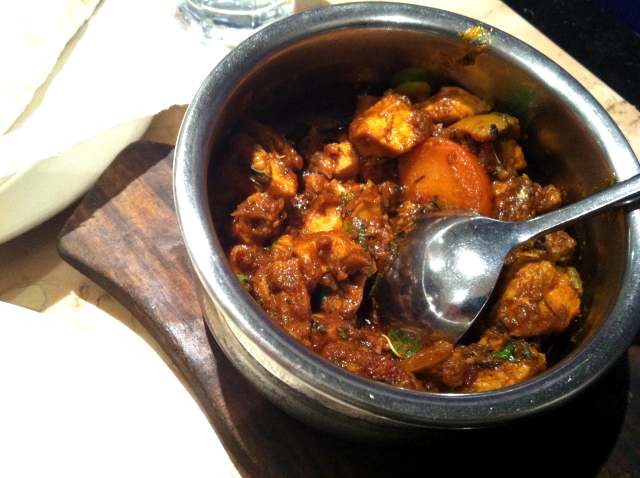 I said the other week that the standard of Asian restaurants in Bradford was on the slide.  It’s not that there aren’t good places out there, it’s just that some of them don’t seem to be trying very hard anymore.

I forgot that whenever I say something like that, the opposite is normally proved right, and so we found ourselves in The International.

The International is another one of Bradford’s simple, straightforward, no-frills cafe style Asian restaurants, and it’s a great example of the type.

The service is quick and friendly, the prices are great and the food is tasty – hot, fresh, spicy and full of flavour.

Most of the food is generally North Indian or North Pakistani, particularly Kashmiri, and I think I’ve eaten most of the menu at some point or another, but tonight we had an achari murgh, a hot chicken dish cooked with sour pickling spices and a channa murgh, chicken cooked with chickpeas, milder and earthier, but gutsy and distinctively Kashmiri. Starters included some brilliant masalla fish – white fish marinated in a concoction of spices and then deep-fried – and the usual kebabs, bhajis and assorted pakoras, which are the best part of any meal.  This is fact.

The naans are particularly good…an Asian restaurant can be judged almost entirely on the quality of its naan bread, and The International’s are excellent – thin and a little crisp, and a sensible size (none of this ‘naan the size of a blanket’ rubbish).

There’s nothing at all that’s going to surprise you at The International – it’s a proper, unpretentious, solid and honest Asian restaurant, and one of my favourites.

It’s always been good, and it has the feel of a place that always will be.

Goan-style pork vindaloo
Can you really review a meal you didn’t pay for?