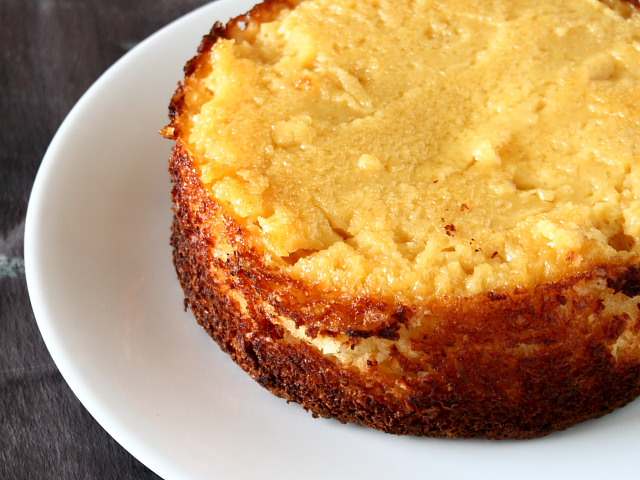 I made a curry a while ago that called for a couple of tablespoons of dessicated coconut.

As you can’t buy just a couple of tablespoons of dessicated coconut, the rest of the massive, opened packet has sat in the cupboard ever since, waiting to be thrown out in the next Great Clear Out, sometime in 2012 or 13, probably.

Instead of just letting that happen, I decided to do the right thing and hunt out a recipe that made use of dessicated coconut.

This is a traditional Moroccan cake, a Jewish recipe from Claudia Roden’s classic The Book of Jewish Food

(really, everybody should own this book).

It’s quite an unusual cake, with a little twist that only becomes apparent when you turn the cake out at the end.

Start by mixing 250g of dessicated coconut and 250ml of orange juice together, letting the orange juice soak into the coconut for a good quarter of an hour.  The coconut should have started to soften slightly.

Separate six eggs and add the yolks to the coconut, along with 300g of golden caster sugar and four tablespoons of sunflower oil.

Beat the egg whites until they’re at the ‘you can hold the bowl upside down over your head and not end up in a mess’ stage, then gently fold them into the coconut mixture.

Pour the mixture into a well greased, non-stick cake tin and bake for forty-five minutes at 180c.

Let the cake cool a little and then turn it out, upside down, onto a plate.

A base of creamy egg will have formed on the bottom of the tin as the mixture has sunk and separated, and this base will end up on top of the turned-out cake.

If you’re lucky, the egg might have scorched a little to give a bit of crispness.

The finished cake is very light and crumbly, and it feels unusually healthy for a cake, probably because it hasn’t got any butter in it.

Coconut counts as one of your ‘five a day’, right?