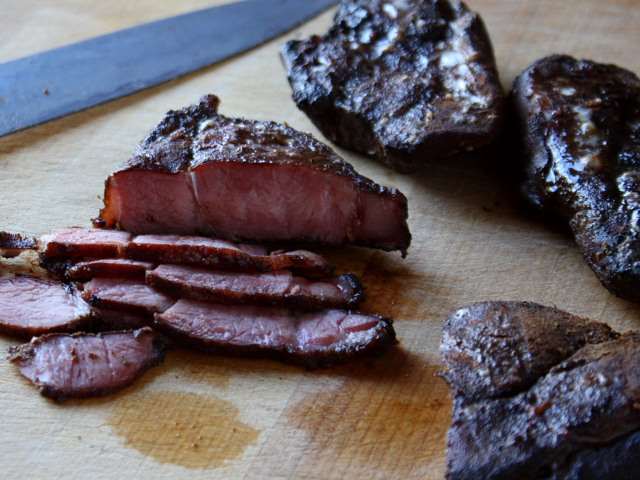 Preserving meat … sounds like something that could go badly, botulism-riddled wrong, doesn’t it?

Charcuterie is a a slightly daunting area, and it isn’t an undertaking to be taken lightly. I’m nowhere near ready to cure and air-dry a whole leg of pork, or equipped to maintain the specific temperature or level of humidity suitable for curing salami or pepperoni.

There are no dangerously modified fridges around here.

There’s a halfway house, though … there are plenty of charcuterie recipes that you can make that aren’t quite as temperamental as some of the more artisan air-dried produce. The air drying process starts with something raw, and ends, after curing and drying, with something that you can eat without having to cook it any further, something that’s properly preserved and that will keep for months.

The halfway house involves curing the meat, then cooking it in some way. Bacon is a perfect example of this method – cured meat that has a definite shelf life, and obviously needs cooking, until it’s crisp, please.

Here’s an easy introduction to this particular brand of pseudo charcuterie called tasso ham. It’s a Cajun delicacy, pork shoulder steaks cured quickly, smothered in big seasonings, then smoked until cooked, all achievable with kit that lives in the average shed.

Tasso ham needs one slightly unusual ingredient, but it’s an important one – pink salt, or Prague powder #1, or Instacure #1, or whatever it’s called these days. It’s essentially sodium nitrite, a chemical that, when mixed with salt, forms a basic curing mix. There’s more about the vital difference between sodium nitrite and sodium nitrate here. If you’re not sure, look for a ready-mixed basic curing mix.

To make a basic curing mixture by mixing 450g of salt, 225g of sugar and 50g of pink salt together. That’s it.

Use the curing mix to cure about 2kg of pork shoulder steaks, big, chunky steaks, if they’re available – the chunkier the better. Pour the curing mix into a large shallow bowl, and press the pork into the salt, dredging the top until it’s completely covered. Transfer the pieces of pork to another dish, laying them in a single layer, and sprinkle over the rest of the curing mix.

Refrigerate the pork, and after four hours, rinse it clean under a running tap. It isn’t a long cure, but it’s important. The cure keeps the meat pink, flavours it, preserves it, and turns it into ham.

The next part is the Cajun bit. The cured pork gets a proper battering from 30g of ground white pepper, 15g of cayenne pepper, 6g of dried marjoram and 24g of ground allspice … that’s a heady mix, and you can kind of see already where this is going …

So, pork shoulder, cured and covered in some quite powerful flavours. It just needs cooking, now.

This is barbecue territory. It’s possible to hot smoke food in many ways, but the easiest and most accessible way is just to use a normal covered barbecue.

Set a small fire at one side of the barbecue, near to one of the air vents in the base, and let the charcoal burn down until it’s covered in grey ash. Throw a couple of big handfuls of wood chips onto the coals, set the meat on the racks at the other side of the barbecue and put the lid on. The wood chips will smoke furiously, and the barbecue will quickly fill with light grey, sweet-smelling smoke.

The type of wood makes a difference – I used chips of apple wood I found on the Internet for a couple of quid, and they provided a light, clean taste with a tinge of acidity to it.

The meat is ready when it reaches an internal temperature of 65c, or 150f. Use a meat thermometer to check. It’s hard to say how long this will take, but keep the fire tended by adding more wood chips until the meat gets up to temperature.

Tasso ham is never eaten on its own. Instead, it’s a vital ingredient in things like jambalaya, or gumbo, adding a powerful injection of flavour and heat into the dish. It’s also very good finely diced and fried with potatoes, served with a fried egg on top.

This method is from Michael Ruhlman and Brian Poleyn’s peerless Charcuterie: The Craft of Salting, Smoking and Curing