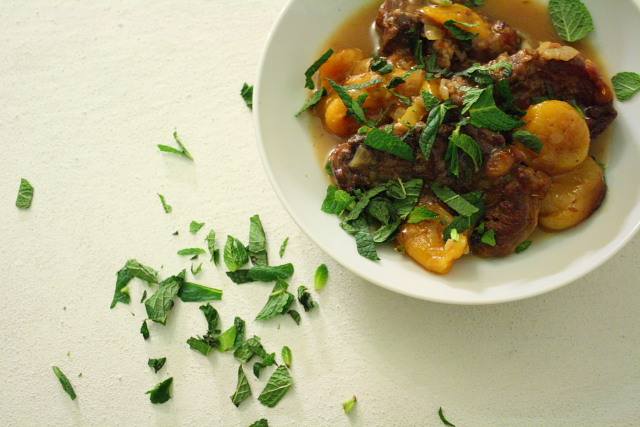 Most of the time, I use fairly standard cuts of meat, the usual things that you find anywhere and everywhere, but the advantage of shopping at a proper butcher’s is that there’ll often be some odd bits on offer.

This dish revolves around one of those oddities – neck of lamb. Neck isn’t used that widely, although it’s readily available, especially in the local Asian butchers … it’s suited to long, slow cooking, so an affinity with curry is fairly obvious. Instead of Asian, this has loose North African overtones, full of apricots, cinnamon and lemon. It’s reminiscent of a tagine.

This is a well-behaved dish. It sits quite happily in the oven for an hour and a half, troubling no-one. It cares not for mere inconveniences such as precision in timing. Feel free to lower the temperature and extend the time. No harm will come to your dinner.

Lamb neck comes in all sorts of shapes and forms. Often, it’s chopped up into small serving pieces – this is mostly the case at an Asian butchers – but for this dish, it’s best if the meat comes from the middle of the neck in slices. That way, there are substantial and interesting pieces in the pot.

Remember also that there are an awful lot of bones in neck. It’s a complicated part of the sheep’s anatomy, and that means that you should reckon on using more neck than you would trimmed meat, to compensate for the substantial quantities of bone. 1.25kg of lamb neck is about enough for four.

As with almost every dish of this type, start by dusting the pieces of meat with flour, seasoning them well with salt and pepper and evenly browning them in oil in a large pan over a moderate heat.

Once the meat has browned, the flour will have left an acrid black layer in the bottom of the pan, so wipe this out and add some more oil to fry two medium chopped onions. Let the onions soften for about ten minutes, then add a teaspoon of cumin seed, two teaspoons of ground coriander and half a teaspoon of crushed chilli flakes.

Two smashed cloves of garlic and a thumb-sized chunk of fresh ginger, peeled and finely chopped, along with two long strips of lemon zest and a cinnamon stick go in next, followed by 250g of dried apricots and 750ml of water.

Let the sauce start to simmer, before returning the meat to the pan, along with any accumulated juices, seasoning it with salt and pepper.

Put a lid on the pan and place it in a 160c oven for about an hour and a half, or until the meat is very tender and falling away from the bone.

On serving, stir in a generous handful of mint leaves and more shredded lemon zest.

This recipe is from Nigel Slater’s The Kitchen Diaries II

. Like the rest of Slater’s work, it’s a beautifully written book – it continues to stagger me how well crafted his books are. They’re a real pleasure to read, to hold, to use.

Practical brilliance on every page.

WIN – tickets for The Cake and Bake Show, Manchester
Horse meat, and where your food comes from