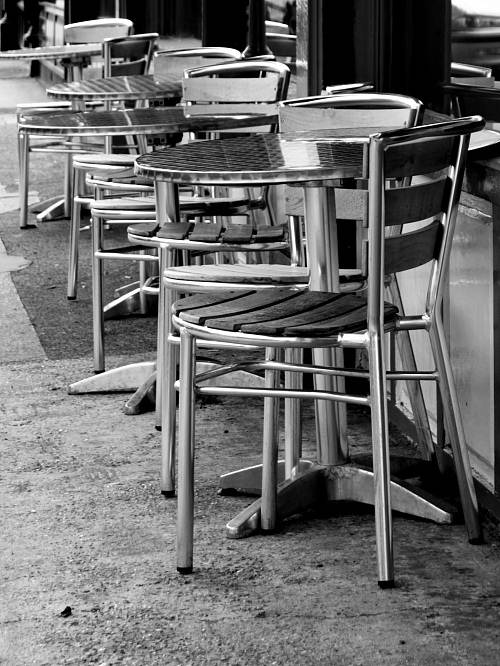 Well, no, not really…more like one of those ‘modern British’ places.  There’s a lot of belly pork, lamb, black pudding and the like, with the odd Mediterranean dish and some Asian flavours here and there, too.  Mainly though, think classic British ingredients and you’ll be close to the mark.

It’s been there for years, hasn’t it?

Yes, absolutely forever.  La Rue is as much a part of Saltaire as the Mill’s chimney, the four stone lions and traffic jams at the roundabout.

Is it good or is it just banking on its reputation?

Nothing of the sort.  It’s surprisingly good, and consistently so.

I’ve eaten there several times over the years, and it’s always been OK – decent cooking, nice atmosphere, etc, etc, but this time, it seemed like the kitchen had stepped up a gear and really got stuck in to their menu.

I ordered a starter of hash brown, black pudding and bacon, which I fully expected to be something hearty, messy and perhaps a little thrown together, but what I got was a fresh potato cake packed with herbs sat on top of a slice of very good black pudding with a perfectly poached egg on top, covered with a hollandaise type sauce with chunks of crisply fried bacon around the edges.  It looked like it had been put together by somebody who had an eye for putting together a plate of food, and it tasted great.  Uncomplicated, yes, but very tasty.

The rest of our food was similarly good, including a properly cooked piece of chicken and a crème brûlée that cracked open with the slightest tap of a spoon, instead of the industrial drill you normally need to get into such things.


It must be busy?

I pass La Rue often, and it always seems full.  It’s sometimes hard to get a decent table at the weekend, and the dining room was full by 8pm on the Wednesday we ate there.  The fairly decent £15.95/£17.95 pricing for two/three courses seems to help.  Reservations would be a good idea, but we chanced our luck and managed to get a table on the spot.

It’s essentially two shop units on Gordon Terrace converted into one restaurant.  There’s a main dining room fronted with big windows and an awning, some tables outside for lunch, a smaller bar and dining area upstairs and a further dining room in the basement.  It’s all very clean and modern looking, but it can feel cramped at times…tables are perhaps a little too close together, but such is the compromise a successful restaurant with only a limited available floorspace makes.

Very good.  Enthusiastic and friendly. Comped me a round of drinks that they’d forgotten to put on the bill when I mentioned it to the waiter, which was very decent of them.

Not bad during the week – the two/three course deal mentioned above is available Sunday to Friday all evening and up until 7pm on a Saturday, when the prices rocket to the £14 for a main course mark.  Still not outrageous, and certainly not Big City prices, but a decent cut above the normal midweek level.