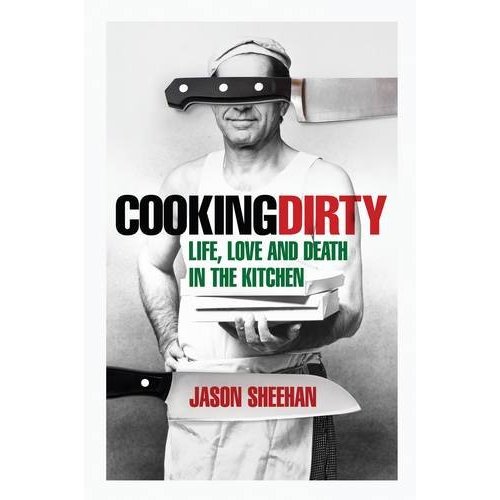 Everybody knows that cooking professionally is hard.

The hours are long, the work is stressful.  Kitchens are hot, inhospitable and downright dangerous places to work.  It’s relentless work, with wave after wave of possible problems and things that could – and do – go wrong.

But to some people, cooking is in their blood.  It’s part of who they are.  They just have to do it.

Jason Sheehan has lived this life inside out.  In Cooking Dirty, Sheehan recounts his experiences in countless kitchens, all different, all bound by common ties.

He started cooking in professional kitchens as a teenager, initiated into the trade in a local Italian restaurant, running the dishwasher and prepping endless trays of pizza dough.  His first night ends with his chef quietly observing “you’re still here”.  Enigmatically, neither a statement or a question, no surprise or admiration, just a simple phrase.

By this point there is nowhere else Sheehan could be.  He’d caught it.  He was in love with the power and the excitement of working in a kitchen.

Sheehan lurches from job to job, rolling up in a restaurant, asking to see the manager, embellishing experience here and there, getting work and fitting in as the ‘fucking new guy’ time after time.  The pattern is always the same.

The kitchens Sheehan works in are populated by a colourful cast of freaks and characters with their own language, their own rites of passage, their own culture.  All manner of life passes through a restaurant kitchen and it’s shady and dirty back alley, its walk in freezer and its locker room.  All of humanity is concentrated down into a handful of men and some women who are often closer to their parole officers than their mothers, working as one to get a plate of food out onto a table for somebody to eat.

Sheehan grasps the urgency and stress of the work and brings it to life.  His descriptions of life in a kitchen are enthralling and horrifying – wholesale quantities of fish defrosted in a back alley with a pressure hose, a young cook instinctively trying to catch something and plunging his hands deep into a fat fryer.

His kitchen is a ‘small, steel box filled with knives and meat and fire’, his compatriots a pirate crew who hang the Jolly Roger on the end of their stations to mock and taunt the rest of the staff.  They’re the pirates, they’re the people who make the restaurant work.  They have control.

These are worlds of precision and chaos, the chugging engine aimed solely at placing food in the hands of the front of house staff to deliver to the diner.

Sheehan talks of cooks as a fraternity, as brethren, working as one, looking out for each other.  It’s a militaristic atmosphere, where people work as a brigade or a platoon, where they work through the most horrific of injuries, where Apocolypse Now is always the favourite film.

It’s impossible to read Sheehan’s book without drawing parallels to the Godfather of the cook-as-outlaw school, Anthony Bourdain, and Sheehan is brave and wise enough to point out that he has Bourdain to thank for “more or less” his “entire career”.  The similarities between Cooking Dirty and Kitchen Confidential, Bourdain’s breakthrough book are obvious, but each stands on its own, and both are great reads.

Cooking Dirty is an excellent piece of food writing, a book full of excitement and narrative drive.  It’s a fascinating peek  into the murky underbelly of the restaurant industry.

If you want to know what goes on behind that swinging door, the one you catch a half glimpse behind as you’re sitting at your restaurant table wondering where your fish is, read Cooking Dirty.

You might discover that the chef is out the back defrosting it with a hosepipe.

Cooking Dirty is published by Atlantic Books at £16.99.