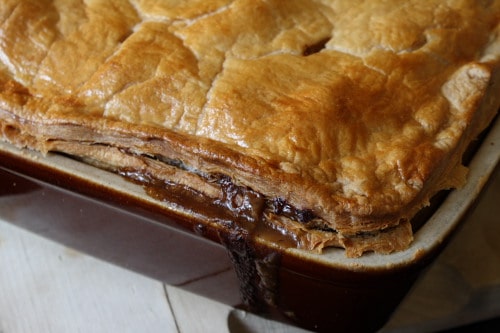 I’ve been doing a lot of nostalgic cooking recently, largely inspired by the Canteen cookbook.

This steak and kidney pie is another example.

I don’t need to say a great deal about it, except that Canteen’s version of this British classic is a little more polished and more refined than my usual attempts.  The secret is in gently nurturing the stew until the meat becomes tender and the sauce thick.  A night in the fridge helps the flavours to develop, as well.

Start by browning one medium onion, 100g of celery and 150g of carrots, each cut into 1cm dice, in a hot pan with a good glug of olive oil.

Remove the vegetables to a plate and brown a kilo of chuck steak, cut into two to three centimetre dice and seasoned with salt and pepper,  in the same pan with some more olive oil if it’s needed.  Keep the flame high and the pan hot.  The idea is to sear the meat and give it some colour.  Do this in batches.

When all of the meat is browned, tip it back into the pan and sprinkle over a generous tablespoon and a half of plain flour, stirring it into the meat juices.

Add 250ml of Guinness and drink the rest of the can, along with 250ml of beef stock and two teaspoons of Worcestershire sauce.  Could I insist on Lea & Perrins here?

Add the sauteed vegetables, two chopped cloves of garlic, 100g of diced leeks, a small bundle of fresh thyme and a couple of bay leaves.

Turn the flame to its lowest possible setting, cover the pan and leave it to cook for an hour.

After the hour is up, add 500g of prepared, diced and seasoned ox kidneys, replace the lid and cook for another hour or hour and a half until the meat is very tender.

At this point, you could cool the filling and let it sit in the fridge for a day or two.

When you’re ready to make the pie, roll out 700g of puff pastry until its about 3mm thick.  Cut an piece of pastry big enough to line whatever pie dish you’re using, leaving some pastry overlapping the edges.  The pie dish should be at least 30cm across.

Tip the filling into the pastry case and cut another piece of pastry for the lid.  Crimp the lid to the base around the edges and cut a few steam holes in the lid.  Small slashes of the knife will do.

Brush the top with beaten egg and bake for forty minutes at 170c, or until the filling bubbles up around the edges.

There’s an old tradition of adding oysters to a steak and kidney pie.  This might seem incongruous, but beef and oysters have a long cultural affinity, as do oysters and stout or porter.  The flavours match and mingle surprisingly well.

If you choose to go surf and turf, slip the oysters in at the same time as the kidneys.

I know it’s Spring now and that this is real depths-of-winter food, but it can be deceptively chilly outside at the moment, so surely there’s time to squeeze in one more proper pie before the Summer?