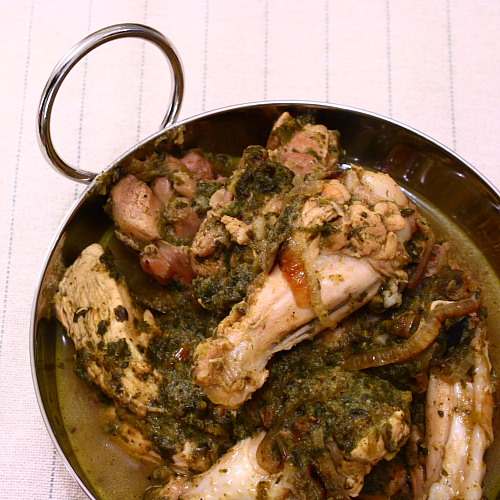 Most of the food you’ll find in a standard Indian restaurant or takeaway is from the North of the subcontinent, from the deserts of Rajasthan, the hills of Kashmir and the densely populated towns and cities of Uttar Pradesh.  Yet more has its roots in Pakistan.

This chicken and spinach curry comes from the Punjab, an area that straddles the India – Pakistan border.  Frequent invasion and occupation by the likes of the British, the Greeks, Mughals, Persians and Turks has left its mark on the region, and vice-versa. Anglo-Indian staples like the tandoor, naan bread, pakoora and dishes cooked with paneer all trace their roots back to the heart of the region.

Start by skinning and jointing a chicken, cutting it into serving pieces.  To do this, cut the skin away and remove the legs, wings and breasts.  Cut the breast meat into four big chunks, and with a heavy knife or a pair of sturdy scissors, cut the leg and thighs into two pieces, right through the bone.  If you’ve got a cleaver, now may be the time to get it out.

Be careful of the blade – don’t use any expensive German or Japanese steel for this.

Next, make some crispy fried onions by cooking three small onions in vegetable oil over a high heat until they’re brown and crispy.  The idea here is to shallow fry the onions in a fairly hefty amount of oil, so that they darken and crisp well before draining them on kitchen paper.  The onions will be sweet and crunchy.

Cook about 300g of fresh or frozen spinach until wilted.  If using fresh spinach, wash it then cook it in a large pan over a low heat.  The water clinging to the leaves will be enough to help the spinach wilt.  For frozen spinach, just melt it gently in a pan.

When the spinach is cooked, drain it thoroughly, let it cool for a while and then chop it finely.

Spinach is a vegetable that freezes very well indeed, and there’s no shame in using the frozen variety in a stewed dish like this.  It’s a worthy cheat.

Next, blend two small chopped onions, a two-inch piece of peeled ginger, four cloves of garlic and a good splash of water together in a food processor or blender to make a thick paste.

Heat a glug of vegetable oil in a large pan and add five whole cardamom pods and a stick of cinnamon.  Let the spices sizzle for a minute, then add the onion paste, frying for about five minutes, stirring all the time.

The onion paste will brown and darken.  Add two teaspoons of ground coriander and one teaspoon of ground cumin, along with half a teaspoon of cayenne pepper, more if you want.

Add the chicken pieces and stir them around, letting the chicken brown, for about five minutes before gradually adding six large tablespoons of plain yoghurt, a tablespoon at a time, stirring all the time.

Next, add two peeled and chopped tomatoes and the chopped spinach.

Top up the pan with about 300ml of water, add two teaspoons of salt and the crispy fried onions and leave to cook gently for twenty-five minutes.

The fried onions will melt into the curry, adding a sweet and earthy note.  The chicken will be soft and tender, the bones adding a depth of flavour to the dish.  The heat of the cayenne is balanced by the coolness of the yoghurt and the body of the spinach.

Easy, quick and delicious, even better the day after.

.  There are plenty of other versions out there, but, to my mind, Jaffrey’s is the best.