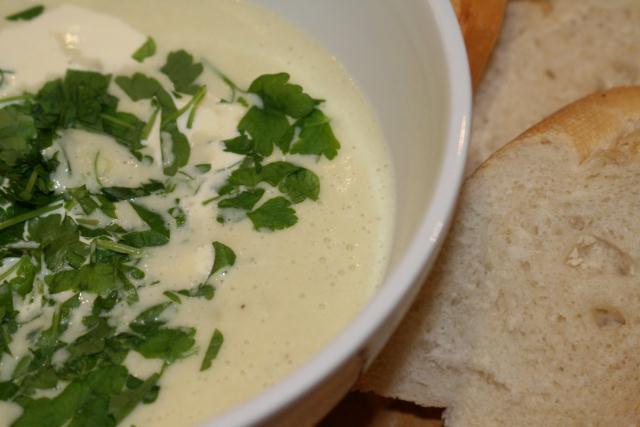 Cullen skink is a thick, milky soup of smoked haddock and potato, originating from the town of Cullen in Morayshire, Scotland.

There’s much debate about the origin of the word ‘skink‘, with the most likely source being a Middle Dutch word for shin of beef which somehow evolved in meaning to include a fish soup. The same word is the root for ‘shank’. A High German word for weak beer is also cited as a possible source.

Nobody seems quite sure.

Cullen skink is a recipe that attracts purists. A quick bit of Googling fails to find two recipes that are the same, with a huge amount of allegiance to personal favourites very much apparent. My version may have the capacity to inflame Scottish passions.

Place two fillets of undyed smoked haddock in a large pan and cover with milk, adding two or three bay leaves and a few peppercorns. If you can’t find undyed haddock, cook something else. Bring the milk gently to the boil and simmer for about three minutes before turning the heat off and letting the fish infuse the milk.

Finely chop a large onion and sweat it in butter, adding two medium peeled and diced potatoes. A floury variety is essential, as it is the potato that will thicken the soup. The onion mustn’t colour, so keep the heat low.

Lift the fish out of the milk and, if it’s cool enough to handle, peel the skin away before flaking the flesh. You’ll find that some of the flakes separate more or less intact and look quite sculpted. Divide the fish into two piles, separating the better looking flakes from the offcuts.

Tip the warm milk into the pan with the potatoes and onions, using a sieve to catch the peppercorns and bay leaves. Simmer the broth until the potatoes are cooked through.

Allow the soup to cool a little before liquidising. Never liquidise a hot soup, because it will explode everywhere, showering you in molten liquid.

When the soup is smooth and velvety, add the pile of broken up fish and blend it in completely. Pour the soup back into a clean pan and add the rest of the flaked fish, along with a good handful of chopped flat leaf parsley.

Adjust the seasoning and serve with a swirl of double cream and some crusty bread.

This is a quick, easy and very tasty soup. It isn’t a big step from this to a smoked haddock chowder, which would maybe only need the addition of some fried bacon and some sweetcorn.