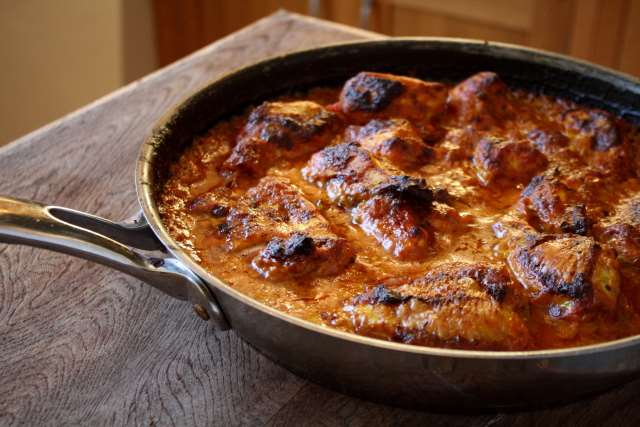 Here’s a turn up for the books.

Instead of bubbling away on the hob for a couple of hours to cook, this curry goes in the oven.

That’s right … in the oven!

Can you imagine that! It’s baked instead of braised. Unbelievable. Your world is never going to be quite the same again, I can tell.

In truth, it’s not that radical, but it does make a nice change, and adds an extra dimension to the dish, if you’re careful and don’t nudge it around too much, allowing the edges to crisp and catch, blackening in the heat of the oven … and that’s the draw, really – those slightly charred bits are delicious, reminiscent of marinaded and barbecued meat, roasted over an open fire.

In most other ways, this is a standard curry, at least in its preparation and assembly. There should be nothing to surprise in the next few lines …

Start with a chicken. A whole chicken. Don’t bother with chicken pieces – a waste of money – just buy a chicken and learn how to cut it up into pieces. You get far more bang for your buck, that way.

Once your chicken is suitably dismembered, get on with the spices, toasting two teaspoons of cumin seeds, the same of coriander seeds, and a teaspoon of fennel seeds in a dry frying pan until they turn a nutty brown colour.

Roughly chop a large onion, and blitz it in a blender or food processor with three large garlic cloves, a thumb-sized piece of peeled ginger and a large green chilli, until you’ve got a rough paste. you may need to add a splash of water to make things move a little more smoothly in the blender.

Next, back to the chicken – fry the chicken pieces off in a large pan in some groundnut oil or ghee, until they take on some colour, then transfer them to a large roasting dish.

Add the spice mix to the pan and fry it in the remaining oil for a minute, then add the onion paste and fry that for about five minutes, scraping everything off the bottom of the pan as you go.

Empty a can of tomatoes and a can of coconut milk into the blender you used to obliterate the onions (don’t bother washing it out), and blend them together, then pour it into the pan with the fried onions and spices and bring it to a gentle simmer, adding a teaspoon of salt, before tipping the sauce over the chicken pieces in the roasting dish.

Bake in the oven at 180c for an hour, uncovered. Turn the chicken over a couple of times, so that it browns evenly, and try to push the sauce off the chicken a little so that it’s exposed in the oven.

This comes from the stupendously useful River Cottage Every Day, by Hugh Fearnley Whittingstall.