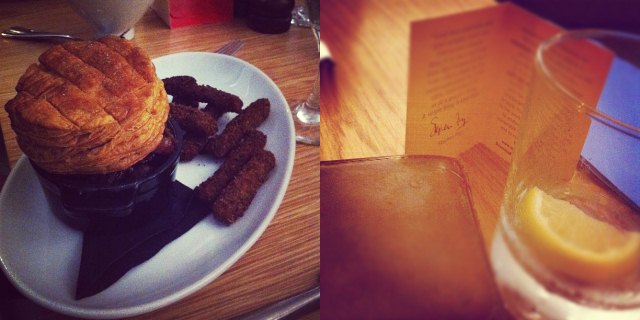 Rob said that he’d find us a restaurant.

Normally, that’s a good thing, but this time he suggested this new place in Leeds that’s run by his old boss from his time at Harvey Nicks.  He described it as a bit relaxed, with plastic tables and chairs.

Plastic tables and chairs weren’t what many of us had in mind, but I knew where he meant, and that there would be nothing of the sort, so I helped string people along, letting them believe we were off to some transport caff in a rough part of Leeds, like that one where the losers go at the end of The Apprentice.

After all, it wouldn’t be the first time that’s happened.

So, much groaning, some complaining about driving the long way round the ring road and a scramble to find a parking spot later, we turned up at Create on the edge of Leeds’ banking quarter.

It’s fair to say that the plastic chair description is factually correct  – there were indeed chairs made of plastic – but not the white garden furniture some of us were expecting, much to their relief.

Create’s dining hall is open and airy.  It’s bright and colourful, with huge photos on the walls and an open plan kitchen that’s captivating to watch.  It has a friendly, relaxed and welcoming edge to it, with staff to match.

It’s probably worth describing a little more about Create and what it is at this point, before talking about the food, because it’s mission and reason for being underpins everything.

Create describes itself as a ‘for more than profit’ company, and the restaurant in Leeds is really only the showpiece for a much bigger enterprise that provides training opportunities and jobs for people who’ve been left homeless, marginalised or vulnerable through a series of employment academies across the North of England that focus on developing people’s skills whilst delivering a comprehensive outside catering offering.  Create offers ‘a future to people who want a hand up not a handout’.

It’s about helping people to help themselves, and giving them the skills to develop a sustainable future for themselves, and on the evidence of what we had to eat last night, they’re doing an absolutely magnificent job.

The kitchen in the Leeds restaurant is led by an experienced chef under the eye of Executive Chef Richard Walton-Allen, ex of Harvey Nichols, but the brigade have all come through Create’s training and ranks, and I don’t think I could be more enthusiastic about their food.

I should just end there and encourage you to go and eat some for yourself, but, well, I can’t help going on about it a bit longer…

I had a fantastic starter of ham hock, formed into small cylindrical terrines, each with a plug of black pudding in the middle, followed by a lovely, rich and silky game pie, stuffed with big chunks of meat and a towering pastry crust and celeriac and sage chips on the side,  and finished with a wedge of a chocolate brownie, all crisp and slightly overdone on the edges and underdone in the middle, as such things should be, with a scoop of milk ice cream on the edge.

There was also a risotto made with spelt and mushrooms that was quite the best thing I’ve tasted for months, and a dish of smoked haddock served with a deep-fried poached egg.

We were a table of seven, and it took a while to order, mainly because the choices were so difficult. I’d asked twitter for recommendations beforehand, and somebody had joked that I just needed a pin to randomly stick into the menu, such was the across-the-board quality of the food.  That might have been meant as a joke, but I’d suggest it’s actually right.

Another highlight was a small dish of salmon cured with beetroot, radish and lemon.  We finished with a fantastic cheese board of mainly Northern classics.

Sometimes, it’s tempting to overlook flaws and shortcomings when an enterprise is trying to do genuine good, but that just isn’t necessary at Create.  It’s a first-rate dining experience, a wonderful restaurant run by talented staff who’ve clearly seized the opportunities that Create have given them.

Photos by the prodigiously talented Instagrammer, @akmurray. Worth a follow, I reckon. He’s addicted to it, he is.

Odd Bits: How to Cook the Rest of the Animal, by Jennifer McLagan
Slow-cooked beef in stout or porter