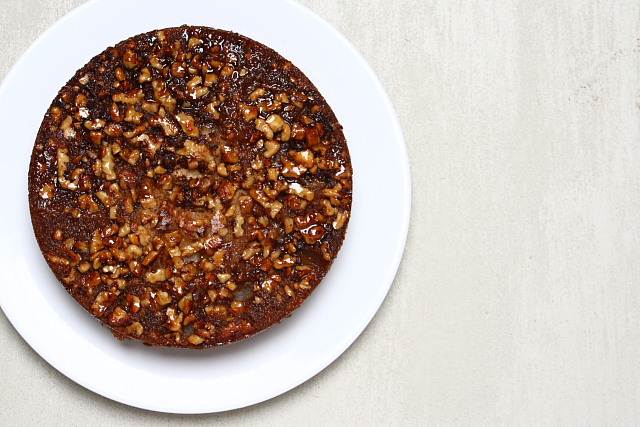 This last week or so have been quite tough, and the coming ones aren’t shaping up particularly well, either.

So, that’s what I did today, cashing in half a day’s holiday tucked away for a rainy day and heading off home in the wind and through the ridiculous-for-a-Monday-lunchtime traffic with some vague idea about making something from that David Lebovitz

book I wrote about the other week.

There’s a recipe in there for a maple and walnut pear cake, and those in the know will realise the significance of maple syrup in the context of our current situation, so it had to be that, made with a particular bottle of maple syrup, couriered personally from Canada a few weeks ago by my Dad.  It’s a big bottle, nobody will be surprised to learn.

This is a cake with a bottom that ends up on the top, a layer of maple syrup and walnuts under, then over a layer of pears, sitting on top of a light cinnamon cake.  With any luck, some of that maple syrup will leak through the pears into the cake itself when you turn it out.

The topping goes in the bottom of the cake tin.  Start by toasting about 50g of walnuts until they start to take on some colour, then chop them roughly. Set the nuts to one side, then weigh 60g of soft brown sugar into a pan, and add 80ml of maple syrup to it.

Heat the pan gently until the mixture starts to bubble.

Stir it often, and let it bubble away for a minute, then take it from the heat and pour the maple syrup and now-dissolved sugar into a 23cm cake tin.  The mixture is thick enough to make sure that it won’t leak out of the sides of a loose-bottomed cake tin.

Spread the chopped walnuts over the mixture in the cake tin.

Next, peel, core and quarter three hard dessert pears before slicing them into slithers maybe five or six millimetres thick.  Arrange the pear slices in the bottom of the cake tin in an overlapping pattern and set the tin aside for now.

The cake batter is easy.

Beat 115g of butter in a stand mixer or by hand until it’s light and pale, then beat in 100g of granulated sugar and 60g of soft, light brown sugar until the sugar is incorporated and the mixture is smooth.  Beat two eggs into the mixture, one at a time, along with half a teaspoon of vanilla extract.

Weigh out 210g of plain flour, and add a teaspoon of baking powder, two teaspoons of ground cinnamon and a half teaspoon of salt to it, mixing together.

Add about half of the flour to the bowl with the cake batter and stir gently to mix.  Add the rest of the flour, along with 125ml of milk and stir everything together until the batter is smooth and creamy.

Pour the cake mix into the tin, taking care not to dislodge the carefully arranged pears, and bake at 180c for fifty minutes, or until a toothpick plunged into the heart of the cake comes out clean.

Leave the cake to stand for fifteen minutes or so, and then run a knife round the edge of the tin to dislodge anything that’s stuck and turn the cake out.  Gently prise off the base and scrape any rogue walnuts back into place.

This is a cake best eaten warm, so don’t hang around.