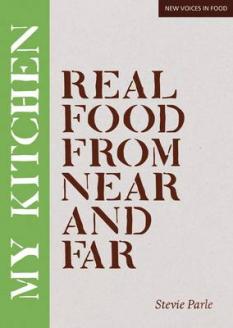 “The truly delicious things are not always those that cost a fortune, but those that have been passed from generation to generation; you can taste their integrity.”

Stevie Parle’s book My Kitchen: Real Food from Near and Far

isn’t constrained by geography.  This isn’t a collection of recipes with a defined focus on a particular cuisine.  It’s a collection that jumps and flits, moving quickly between continents and styles, tastes and techniques.  Parle explains that the things that interest him are “simple recipes that have evolved out of love, excess, or poverty…the dishes of stalls and temples, homes and cafes from around the world”.  It’s this search for authenticity that binds this book together, that gives it its voice and its direction

My Kitchen: Real Food from Near and Far

is an eclectic mix of recipes from all over the world, some from areas whose food hasn’t ‘broken through’ into the British kitchen just yet.  Homemade pork pies – the real deal, pig trotter jelly and all – butt up against a Cambodian dish of pepper crabs and Vietnamese banh mi – sandwiches of slow cooked pork shoulder with pickles.  There’s a Bakewell tart next to a bouillabaisse, grilled leeks in a Romanesco sauce near a sour mango curry.

It’s a sometimes confusing mix, but one that has an overall sense of wholeness and purpose to it.  Parle’s recipes are arranged into months of the year, obviously and fashionably with seasonality in mind, but there’s also an adventure trail being laid out for the reader and cook.

It’s a fascinating little journey, full of twists and turns.

Parle clearly sets out to challenge and inspire in equal measure.  There’s little here that should scare or daunt the cook, but there are things that will need a little application and research, some trips to, as Parle puts it, “a new part of town to rummage in an unusual shop”.  At first glance, this might just sound pretentious and frankly too much bother, but it’s all to the good.  A cookery book should inspire as well as console, it should be a transformative thing, something that shakes the cook around a bit, or at the very least, gently nudges in a new direction, and if that direction is to seek out Himalayan basmati rice, where’s the harm in that?

My Kitchen: Real Food from Near and Far

both satisfies and comforts with some elegant European standards, whilst gently whispering in the cooks ear about Vietnam and Cambodia, Japan and India.

Yes, this book reads like a travelogue in parts, a little like an experienced backpacker’s recipe notebook, and in many respects, that’s what it is.  But this experience married to Parle’s time in the kitchens of Moro and the River Cafe makes quite a powerful combination.

It’s a successful balance, in a satisfying little book that’s filled with two of the most important things a cookery book could ever have – authenticity and heart.