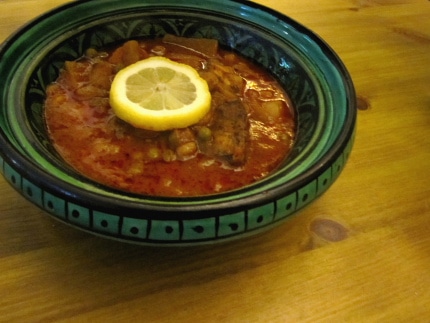 Arabica is a small cafe-style restaurant tucked into a basement in Bradford’s student-ville, just across from the University.

It’s been open for about eighteen months, and I’ve heard a lot of whispers and rumours about this new, fantastic middle eastern place.  Arabica’s is one of those names that seems to have cropped up in too many different conversations for there not to be any substance to it.

It’s good to see something a little bit different in Bradford.  Most of the Asian restaurants are really Kashmiri or Northern Pakistani restaurants – the food of the north of the sub-continent is well embedded in Bradford’s curry culture, and a restaurant focusing on a different part of the Middle East/Asian area with a splash of North Africa is definitely a good thing.

Arabica is a relaxed and informal place.  Simple tables and chairs are laid out in a plain but nicely decorated room.  The menu is on a blackboard, in both English and Arabic.

We arrived early, planning to have something to eat before going home to watch the second half of the football.  When we arrived, the place was empty, but we caught the attention of one of the waiters who explained the menu and took our order.  The owner popped out of the kitchen to say hello and to fiddle with the TV in the corner.  Cameroon were doing quite well against the Danish, and we chatted about England’s abysmal performance the night before.  He was a lovely guy – warm, welcoming and just the sort of host a restaurant like this needs.

I’d seen Paul from How Not to Do a Food Blog’s review on The Culture Vulture a couple of weeks ago, and his photos meant that I was definitely going to order a tagine of some sort.  Jen ordered an Afghani curry and we shared a mixed mezze starter.

As we waited, the kitchen kicked into life and the smell of mint and coriander, cardamom, cumin and chilli started to fill the room. It smelt good.  Very good.

The starter arrived – a tray of baba gaboush, hummus, marinated olives and tabbouleh with a large naan on the side.  The tabbouleh was a heady mix of freshly chopped parsley, mint, onion and tomato, fresh as a daisy and packed with flavour.  The hummus was smooth and thin, pools of olive oil on the surface, the baba ganoush was smokey and flavoured with tahini and garlic.  We scooped the  dips up with an excellent flatbread.

Main courses were just as impressive.  My tagine arrived as I’d hoped in a dish with a traditional conical lid on it.  The sauce had chickpeas, carrots onions and tomatoes, the chicken was tasty and tender.  It was a really good dish.  The Afghan curry was just as good.  We had some rice, too, flavoured with cardamon, apricot and other  fruit, which was outstanding.

Arabica is completely unpretentious.  It’s a great place and a great experience.  The food is pretty good and the service excellent.

Something a bit different, and well worth trying.

Arabica is unlicensed, so no booze is available, but Delius, the bar across the road is pretty good.