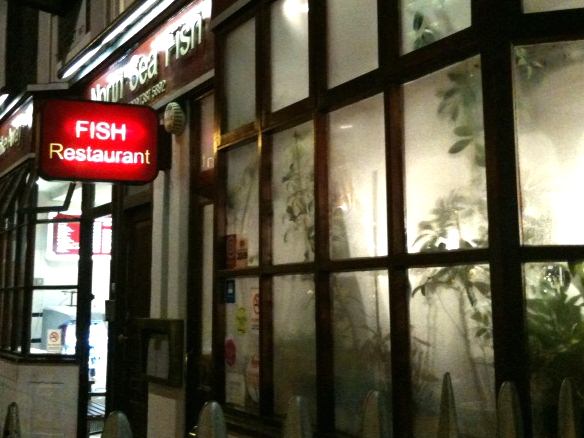 Fish and chips somehow always taste better in faded surroundings, in places that harbour echoes of more glamourous times past.  In this sense, the The North Sea Fish Restaurant’s lack of interior design and unwitting nostalgia do nothing but add to its pub function room like charm.

It’s had it’s ups and downs over the years, and more than a little intrigue and espionage, too – MI5 apparently bugged the place in the eighties, trying to eavesdrop on miner’s leader Arthur Scargill, who used to eat there regularly, discussing tactics with his comrades from the National Union of Miners over plates of cod and chips.

The (laminated) menu is exactly as you’d expect.  Fish, a few varieties, including cod, haddock and plaice, deep fried, served with chips and tartar sauce.  There are other embellishments and quirks (they’ll grill instead of fry, if you’d prefer), but frankly, if you veer towards that end of the menu, you’re missing the point, and, dare I say it, the fun.

Fish fried in batter is what the North Sea does best, and their best is extremely good indeed.

Fillets are served in two sizes, normal and ‘jumbo’, which roughly translates as ‘insanely large’, and are fried crisp in a light and airy batter, the fish steamed perfectly inside it’s batter case.  Crunchy chips are served, a little pointlessly, on the side in a retro basket, along with a first rate, freshly made tartar sauce.

The restaurant prices are acceptable for a proper meal, but the takeaway next door is where the bargains are.  After all, don’t fish and chips taste better eaten out of paper in the open air, anyway?

Should kids be allowed to eat in restaurants?
Dan Birk at The Devonshire Fell, Burnsall, North Yorkshire