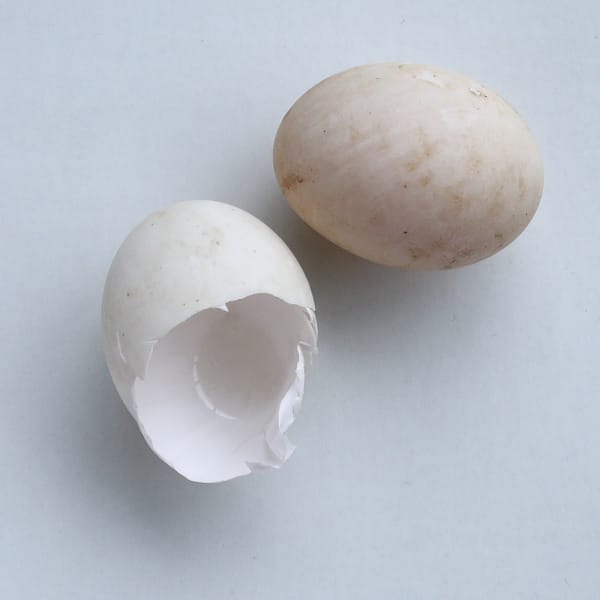 Duck eggs fell out of fashion just after the Second World War when a health scare connected eating duck eggs with outbreaks of salmonella poisoning.

The evidence seemed a little thin, but the connection in the public consciousness took hold, and demand for duck eggs plummeted.  The mass producers ignored ducks in favour of the more easily farmed chicken.

Later, people forgot why they didn’t buy duck eggs, they just didn’t buy them, and the large scale farming methods involved in chicken egg production took control of the whole egg market.  Chicken eggs were cheaper, more convenient and didn’t have that connection to salmonella, at least until Edwina Currie’s infamous anti-egg crusade of the mid-1980s.

Duck eggs are still not widely available, but they’re out there in farm shops, delis, whole food shops, farmer’s markets and the like.  For those willing to hunt some down, the hunt is worth it.

Mine come from the local butcher, who runs his own farm, raising beef steers, pigs and chickens, along with a small flock of ducks.  Some of the ‘posher’ supermarkets also stock them – they cost more, and they probably aren’t as fresh.  The butcher’s are £1.99 for half a dozen oddly sized eggs, more than hen’s eggs, but they’re bigger and fresher.

A duck egg can be used as a direct substitute for a normal hen’s egg.  The yolks are larger and higher in fat than a hen’s egg, which makes them richer and perhaps a little ‘gamey’.  They’re also packed with vitamins and minerals, and provide a powerful protein boost, approximately 15% of the adult recommended daily allowance.

Duck eggs are especially useful in baking, given the higher proportion of yolk to white – you’ll hear plenty of tales about the near supernatural lightness of cakes, etc – but they also make a superb omelette and lift the humble pancake to new heights.

To me, the best thing to do with a duck egg is to fry it gently in butter, and eat it with a couple of rashers of bacon, toast, some good coffee and the Sunday papers.