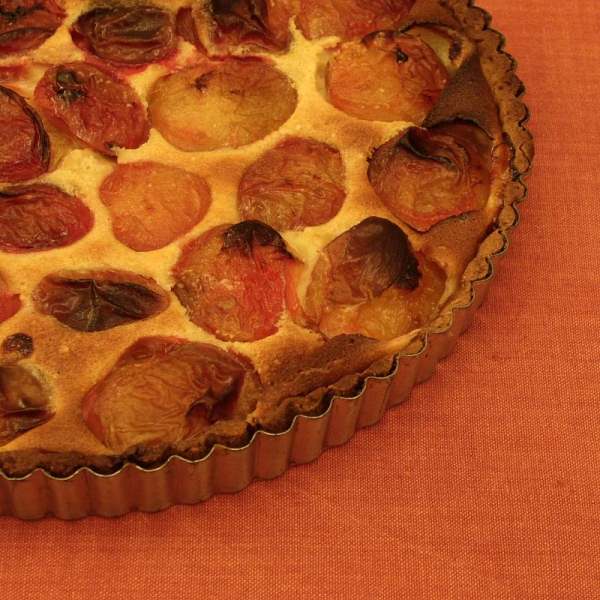 I posted some photos last week from a small café and bookshop in Becherel, France.

It was an amazing place, a bookshop with a café attached as a sideline rather than the other way round.  This is the way these things should be.

It was how I imagine my bookshop will look and feel if I ever have the good fortune to run one. Mine will probably have more books in English, though.

As we were leaving, the owner appeared with a freshly baked tart aux quetsches and set it down on a table at the front of the café.  The tart was packed full of plums in a crisp pastry base, the plums slightly caramelised on top.

It was magnificent, as you can see here.

I had my camera out, having sneaked a few photos when nobody was looking.  I knew I had to get a photo.

The problem with this sort of situation is that I think too much about it, start to panic and end up with a shaky photo.  Sometimes I pass shakiness off as ‘artistic blur’, but that’s not always possible.

I stood at the table, looking at the tart, the owner watching me with a quizzical look on her face.

“Why is he going to take a picture of my plum tart?”, I could see her thinking.  Something about the English being crazy probably also flashed across her mind.

My French is nowhere near good enough to explain about this blog and say that her plum tart, whilst it may be a run-of-the-mill, every day thing in her café was probably the single most impressive thing I’ve seen emerge from an oven anywhere in the world, ever.

So I took a deep breath and pressed the button.

I just about nailed it.  I’m sure the good folks at Tastespotting and Foodgawker will have something to say about sharpness or composition, but the end result was good enough for me.

Tarte aux quetsches is a classic example of French pattisserie, and it’s a fairly simple dish to bake.

For the base, I used the ever-dependable shortcrust pastry from Sam and Sam Clark’s Moro cookbook.  This is the same base I used in last month’s almond and oloroso tart, and the recipe for it is included in that post.

The rest of the recipe comes from Orangette, but it’s really just a simple custard with some stoned plums set into it.

Start with the custard.  Whisk two eggs, 60g of caster sugar, 75ml of double cream, 75ml of milk and three tablespoons of plain flour together.  Make sure that the sugar is completely dissolved and the flour properly amalgamated.

Arrange about 750g of halved, stoned plums in the cooked and slightly cooled pastry case, cut side down, and pour the custard over the top.  Don’t over fill the case.

Let the tart cool completely before serving, and refrigerate any leftovers.

The taste of the tart is very much dependent on the sweetness of the plums.  If your plums are very sharp, a dusting of icing sugar might be necessary.  Mine had hung around on the tree for an extra week or two past their best, and were very sweet indeed, so I skipped this.