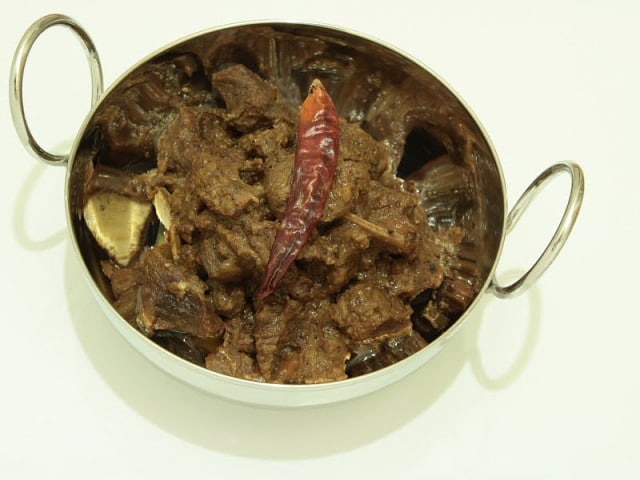 A long time ago, a demon called Kolhasur settled in the beautiful and rugged land along the West coast of India, bordering the Indian Ocean.  The people suffered terribly at the hands of their demon neighbour.

A goddess, Mahalakshmi, was sent to free them.

Mahalakshmi killed Kolhasur, but in an act of benevolence, granted his dying wish and named the town Kolhapur in his name.

Kolhapur grew prosperous, and became an important town in the Mahratta Empire.

The food of Kolhapur is associated with the Mahratta Empire, whose forces were the finest of India’s warriors, routing the Moghals and causing untold mischief for the British.

This curry has a lot of the demon’s fierceness and the Mahrattas’ bravery.  It’s a fiery affair, hot, rich and spicy.  You could tame it by leaving out some of the chilli, but that just misses the point.

Marinate a kilo of cubed lamb or mutton, preferably on the bone, in four generous tablespoons of yoghurt, two teaspoons of peeled and grated fresh ginger, a teaspoon of crushed garlic and a quarter teaspoon of turmeric.  The meat should sit in the fridge overnight if at all possible.

Heat a large pan and add a glug of vegetable oil, two to four dried chillis and a cinnamon stick.  Let the chillis colour slightly and then fish them out of the pan and set aside.

Add ten whole cloves, two tablespoons of coriander seeds and ten cardamom pods to the pan and stir and roast them until they darken and start to smell exotic.  Move the spices to the plate when they’re ready.

Grind all the spices together in a clean coffee grinder until you have a very fine powder.  Mix a teaspoon of salt into the spices.

Stir for a minute or two and then add the ground spices and half a cup of water.  Stir and cook for a few minutes.

Next, add the meat, marinade and all, stirring well for five minutes before topping up with another half a cup of water.  Bring to a gentle simmer and then reduce the heat and cook gently for an hour and a half, until the meat pulls away from the bone easily.

Check the seasoning, adding more salt if necessary, and increase the heat to reduce the sauce if its too loose.

Serve with plain rice and a cold beer.

How to make butter at home
Jamie’s Italian, Brighton