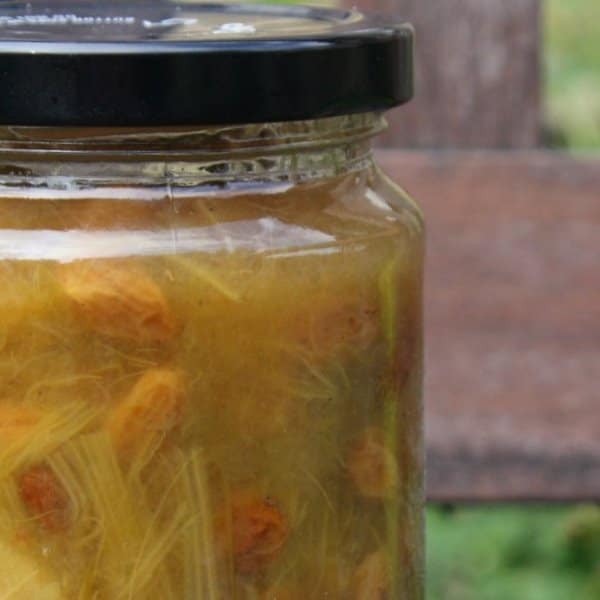 Around this time of year, rhubarb tends to get tired and worn out.

The stalks, those that haven’t been plundered already, are green and thick, with big umbrella-like leaves.  Everything starts to look a bit Jurassic, overgrown and gnarled.

The slender pink and red elegance of the early stalks has long faded, and the taste has changed too.  A bitterness is creeping in.  Late July’s rhubarb is not a delicate crop, and the cook needs to think up new ways of squeezing something good out of the last of the stalk.

The crown mustn’t be stripped bare.  A few stalks left where they are, sacrificed by the kitchen for the good of the plant, will help the plant rejuvenate and gather it’s resources.  A couple of shovelfuls of manure won’t harm it either, especially if the manure comes from a passing horse.

There’s time for one last rhubarb dish before the season ends, though, something to see you through the winter.

This relish will keep for a year.  It’s fantastic with cold meats, pies and the like.  Use it as you would a chutney.

Make a spice bag by tying a thumb sized chunk of fresh ginger, two cinnamon sticks and half a dozen cloves up in a muslin bag.  Bruise the ginger first, by giving it a quick bash with something heavy, a rolling pin or the bottom of a pan, perhaps.

Measure 500g of granulated sugar, 100ml of cider vinegar and 100ml of water in a large pan, add the spice bag and gently heat and stir until the sugar has completely dissolved.  Set the pan aside to let the spices do their thing.

After half an hour, add a kg of rhubarb, chopped into inch long chunks, along with 125g of raisins or sultanas to the sugar syrup and bring the heat up until you’ve got a gentle bubble.  Cook for twenty minutes until the rhubarb has softened but still holds its’ shape.

Decant the relish into sterilised jars, screw the top on whilst still warm and leave to mature for at least two weeks before using.  There should be enough here for three jars.

The finished relish has a sharp, sweet taste and a wonderful acidity.  I’m saving some for Boxing Day, to go with the cold turkey.

This recipe comes from Preserves: River Cottage Handbook No.2

by Pam Corbin, with a forward by HFW himself.

A superb Father’s Day present, if ever there was one.