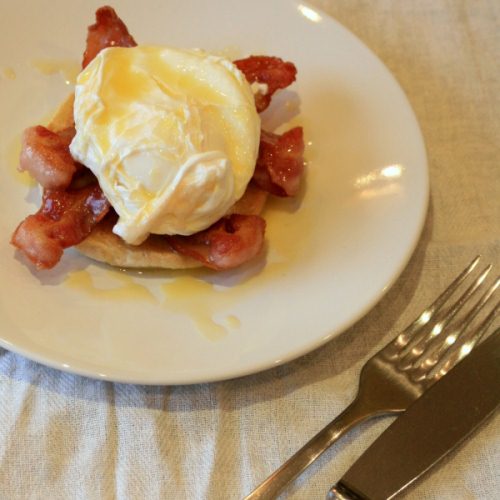 There are plenty of myths and fables about the invention of Eggs Benedict, which seems a little odd, because the combination of a poached egg on a muffin with bacon and a sauce made out of butter seems fairly obvious. You don’t need to try it to know that it’s going to be delicious.

The only thing that’s certain about Eggs Benedict is that it’s an American invention. After that, things get a little hazy.

Stockbroker Lemual Benedict has a decent claim to inventing the dish, supposedly having ordered “buttered toast, poached eggs, crisp bacon and a hooker of hollandaise” at the Waldorf Hotel in New York one morning in 1894 whilst nursing a hangover. The hotel’s maitre de, Oscar Tschirky, was impressed and tweaked the recipe, substituting the toast and bacon for an English muffin and Canadian ham, before putting the dish on the menu.

Another claimant is Mrs LeGrand Benedict, who often ate breakfast at Delmonica’s restaurant in New York. She is said to have developed the famous dish in 1893 with the help of the restaurant’s chef after becoming bored with the usual breakfast offerings.

There may be no definitive answer to the puzzle. Quoted in the New York Times, Gerald Gliber of the Art Institute of New York City perhaps comes closest to the truth;

With hindsight, the ingredients seem destined to be together, and maybe it is hard to see how somebody could ‘invent’ something so simple, elegant and easy to make, and making it really is easy, once you’ve mastered the sauce.

For the hollandaise sauce, you can use the correct method, involving whisking, bain maries and the inevitable split sauce, or the quick one. I’d recommend the quick one – this is a breakfast dish and shouldn’t be laborious.

Heat up a tablespoon of white wine vinegar and two tablespoons of lemon juice in a small pan and add them the bowl of a food processor, with three large egg yolks and a pinch of salt. Turn the processor on to mix the ingredients together.

Next, melt 175g of butter in a pan, and slowly, very slowly trickle the butter into the food processor, with the motor running at a medium low-speed. The sauce will emulsify. If it looks a little thick, a splash of hot water will loosen it. If you have to wait any amount of time to serve, transfer the sauce to a bowl placed over a pan of hot water to keep warm.

Grill or fry some bacon. I like to make sure that the bacon is crispy and a little overdone.

Poach an egg in plenty of boiling water, with a splash of vinegar added, and toast a muffin.

Assembly barely needs any explanation. Arrange the bacon on the toasted muffin, slide the egg on top and cover with hollandaise sauce, serving immediately.