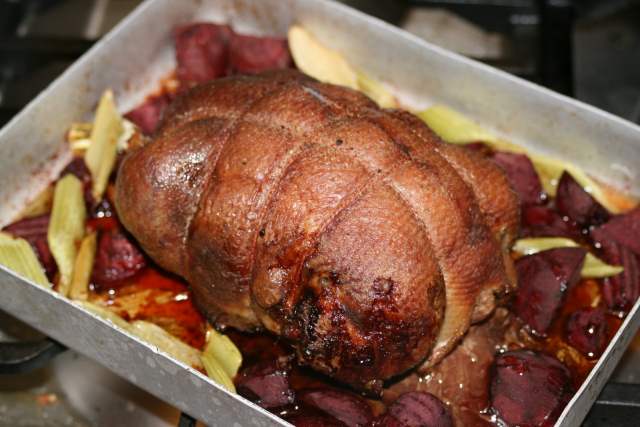 A ‘ballotine‘ is a piece of meat that has been taken off the bone, rolled, stuffed and trussed to make a neat parcel of easily roasted meat. This ballotine involved a wild mallard duck, one of the smaller breeds, stuffed with a boned out partridge, which was in turn stuffed with an apricot and walnut stuffing.

Prepared by the excellent Wild Meat Company, this was one of the Premier League Christmas presents I received this year, and it came accompanied by a decent cut of venison, some mixed game meat for a pie, a couple of pheasants and the odd assorted small game bird. Sometimes, your dad just knows what you like…

The ballotine needed no preparation apart from a ritual seasoning of salt and pepper. I didn’t add any oil as I wanted the skin to crisp properly. The meat went in a hot oven (200c) for twenty minutes.

After twenty minutes, I added some classic game bird accompaniments – beetroot, peeled and chopped into one centimetre squarish chunks, along with some similar shaped celery. In retrospect, a couple of cloves of garlic would have been good too, and some lardons of streaky bacon would have been superb.

The vegetables were seasoned and tossed around in the duck fat, before the tray went back in the oven, turned down to 180c for another twenty minutes.

When the time was up, I set the meat to one side to rest covered in foil and turned the heat in the oven up to finish the veg, another five minutes.

After the beetroot and celery were ready, I deglazed the tray with a glass of a very good red wine that was inexplicably left over (that never happens. There must be something wrong with the fabric of the universe. I blame the Swiss and their fancy particle collider) to make a thin but intensely flavoured and pleasingly bitter sauce.

The duck sliced easily, but was a little over cooked. It’s hard to gauge how long to cook a stuffed joint for, and I reckon this one got about five minutes too long. I was nervous about making sure that the pork based stuffing was cooked properly. Despite this, the meat was delicious, and the stuffing had kept the joint moist and tender, just not quite as rare as I prefer.

The beetroot and celery were natural partners to the gamy meat, which was extremely high quality and had been butchered and prepared carefully and skillfully. Something like this would be ideal for an easy dinner party or lunch – quality meat, easy to cook and quite impressive on the table.

Well done to the Wild Meat Company, you’ve got a repeat customer!