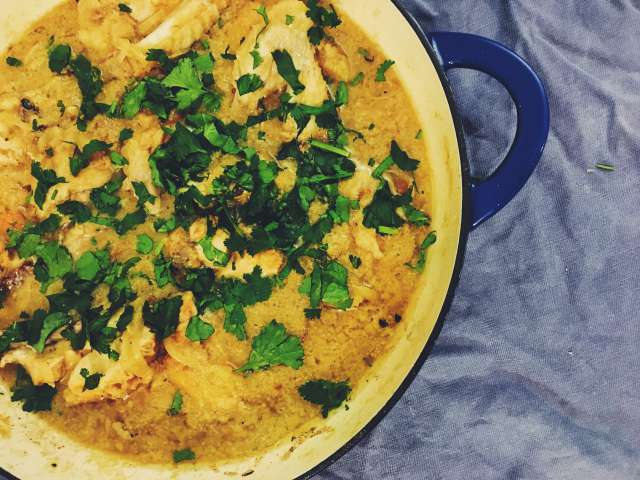 Cooking Indian food can be something of a trial.

It’s always worth the effort, always worth the satisfaction of sitting down to a rogan josh that’s been simmering away for a couple of hours, the spices blending together with unfathomable complexity.

But sometimes, that list of ingredients is just too long. Sometimes, there’s a need for something simpler, something easier.

This is it … a North Indian dish of almost mundane ubiquity, one that uses barely any of the huge range of spices normally associated with Asian food.

This is a chicken dish, built on the familiar base of onion, garlic and ginger, a sauce of yoghurt layered over, and finished with cayenne pepper.

It’s direct and straightforward, relying on nothing more than that ginger and garlic base, rounded out with a swift punch of chilli.

Start by butchering a chicken down into small, bite-sized pieces. Chop the thighs and drumsticks in two, and the breast into four. Leave the bones in place, and use a cleaver or very heavy knife (£7 spent on a cheap cleaver in a Chinese supermarket is £7 well spent).

Peel five onions and thinly slice half of them and roughly chop the other half.

Put the roughly chopped onions into a blender with five peeled cloves of garlic and a thumb-sized piece of peeled ginger. Add a splash of water and blend to a smooth paste.

Now for the cooking.

Heat some vegetable oil in a large, heavy-based pan and fry the sliced onions over a medium heat until they’re starting to turn brown and are properly softened.

Set the cooked onions aside, and, in the same pan, fry the chicken pieces in batches until they’re starting to colour. Set the chicken aside as well.

Turn the heat to low and pour the blended onion, garlic and ginger paste into the pan, scraping up anything stuck to the bottom of the pan as you go. Fry, stirring all the time, for a few minutes, until the paste starts to smell cooked, and then add a tablespoon of yoghurt, stirring it in, and then another.

Pour 150ml of yoghurt into a bowl, and let it down slowly with 175ml of water, and then add this mix to the pan, along with the chicken pieces, a teaspoon of salt and a quarter of a teaspoon of cayenne pepper.

Bring to the boil, cover, reduce the heat to low and cook for twenty minutes.

Remove the lid, and increase the heat to start to boil off some of the liquid and reduce the sauce to a thick consistency before adding the reserved sliced onions back in and heating them through.

Serve with rice, and chapatis.

Mans Market, Leeds
Palestine on a Plate, by Joudie Kalla