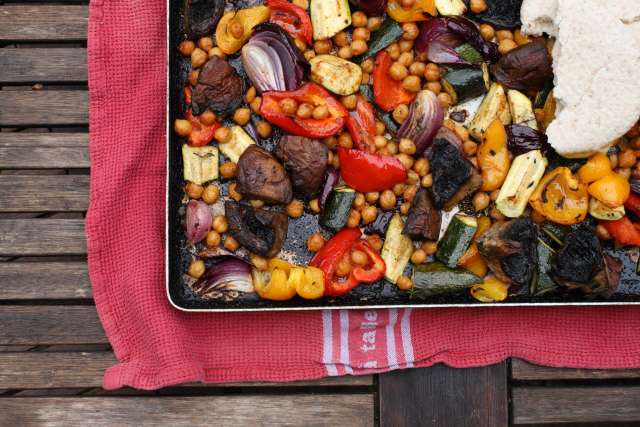 Every week, a weird selection of vegetables would land on my back doorstep. I’d peer into the box early every Wednesday morning to see more kale to add to the mountain of kale from the week before.

Nobody really likes kale, except the people who run veg box schemes.

Eventually, I tired of the whole thing, bored of the same vegetables week in, week out, and frankly, at the alarming cost, which seemed totally at odds to the prices I was seeing when walking through the market every morning on the way to work. Then there was the issue of half the stuff going badly off before I managed to do anything with it …

That was a long time ago, and things have changed. These days, there’s far more choice, and far more control over what actually ends up in a veg box. Kale can be entirely banished. A very good thing.

But, but, but … it’s still a box of vegetables, a big box of dirty veg. There needs to be something else, because – and this may or may not surprise you – there are many times in the week when I just can’t be bothered to think about cooking, and concocting something good out of a vegetable I’ve never heard of before just isn’t going to happen on a wet Wednesday evening after a hard day at work, a cramped train journey home and a bout of ferrying kids to and fro.

That doesn’t mean that I don’t want to eat well, because I do, and I will, but that normally means falling back on a small repertoire of trusty classics that seem to surface all too often, most of them involving pasta of some sort.

Riverford might have an answer, one of many, but a good one at least. Now, bear with me on this, and believe me that this is an honest opinion, despite the fact that I took the corporate dollar and accepted a free sample, but this is a really good little twist on the veg box idea, and it solves some of the problems I used to have with these sorts of schemes.

Riverford have put together a box intended to provide three complete meals for two.

Everything you need to cook a decent meal three times for two people in one box.

My naturally sceptical nature had a field day on this one, so I decided to play it exactly by the book. I would use this veg box EXACTLY as it was intended to be used, including slavishly following each of the three recipes, step by step, start to finish. No corners cut, no off-piste moves, no embellishment at all. If it wasn’t written on the handy little recipe card, it didn’t get done.

I was, of course, expecting to end up with three faintly crap meals, and to have to supplement what was there with loads of extra stuff, but amazingly, this wasn’t the case on either count.

Let’s deal with waste first. There was none.

Well, a tiny bit … all that was left over from the entire box was half a bulb of garlic, which lasts for ages anyway, so no great shakes. Following the supplied recipes exactly resulted in a pretty much perfect use for everything.

Now for the recipes. I cook a lot. I follow recipes all the time, and it’s very obvious to me when a recipe hasn’t been properly tested or thought through. These have – simple, easy steps, good flavour combinations, some useful techniques thrown in there too.

First up was a chicken and spinach curry, packed with lemon and ginger, served with wild rice, a really good little dish, with a proper kick of chilli and citrus. It made a stunning lunch.

Next, a tray of roasted vegetables and chickpeas, dressed with orange juice and vinegar, and served with pita bread. Lovely stuff, and I squeezed an extra lunch out of that one for the following day.

Finally, a quick, pan-fried steak with broad beans with mint, hasselback potatoes and a salad dominated by alfalfa sprouts (“posh cress”). Nothing too fancy there, just a steak, salad and roast potatoes, but actually a very good midweek meal indeed.

I’d probably cook the curry again, box or not.

The most striking thing about this idea is that literally everything is there, right down to a knob of butter to fry that steak in and to finish those potatoes. Spices come in little plastic pots, ready to be just dumped in at the right moment, herbs in small packs, just enough for whatever the purpose is. There’s no slack, and nothing missing. The only things I added were a couple of glugs of olive oil and salt and pepper.

This isn’t the way I normally like to cook, but it definitely has a place for those who want to eat well and either don’t know where to start, or can’t get it together to shop for all the various things that need to go into a decent meal.

Would I recommend it? Yes, probably. It’s worth a try, most definitely.

Is it expensive? That depends … a Recipe Box is about £40, which is a fair whack, but that’s three night’s worth of food sorted completely for a couple. It isn’t cheap, but bear in mind that the veg is organic, and it contains a couple of meals worth of meat too, as well as just about everything you need to put said meals together, and delivery … think of it that way, and it starts to feel like a bit of a bargain.

Full disclosure: As I said before, Riverford sent me a Recipe Box for the purposes of this review. I wrote what I thought.