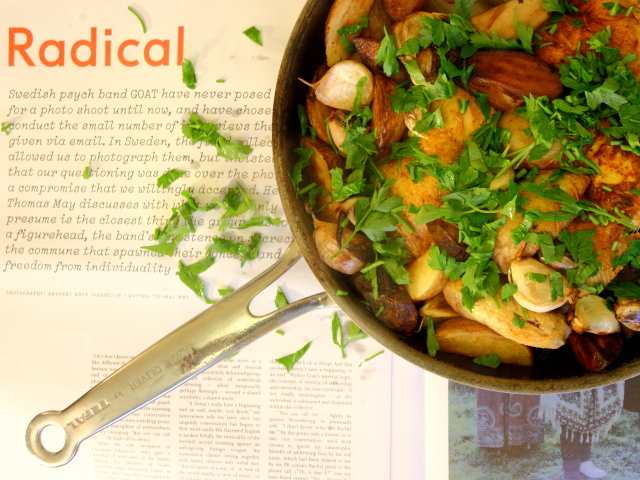 A lot of the food I cook at the moment is about convenience.

Not ‘convenience’ in the sense of ‘piercing the film on some ready meal and throwing it into a microwave’, but convenience in terms of getting the best results with the least effort.

That doesn’t mean that my food is becoming ‘bad’ – there’s a very real misconception out there about food that’s convenient not being good, but it does mean that I’m putting less effort into some meals than I might have done when I had, well, more time.

But again, there’s another misconception … ‘convenient’ doesn’t equal fast, either – far from it … many times, I spend a far greater amount of elapsed time cooking, it’s just that the active time spent at the stove is shorter, with longer gaps between interventions.

It’s lazy or smart cooking, depending on your perspective.

This is a classic example. It’s a chicken sofrito, a speciality of the city of Jerusalem, which arrived there via the Sephardi Jews millenia ago.

As with most dishes that stretch back that long, there’s good reason it’s endured – it’s simple, and absolutely delicious. The basic premise is that a butterflied chicken is lightly and slowly cooked in a big, shallow, covered pan in its own juices for a long time.

That’s just about it.

The chicken emerges tender and perfectly cooked, and there’s hardly anything to wash up.

So, start with a small or medium chicken, about 1.5 or 1.8kg or so, and butterfly it. This simply means turning the chicken so that its breast faces down and cutting out the back in two cuts. The back is perfect for making stock. Push the chicken flat on the chopping board, so that it lays splayed out and looks like a chicken-shaped butterfly.

Heat a good glug of olive oil in a very large frying pan and fry the chicken skin side down, so that it browns, which should take four or five minutes.

Turn the chicken over, so that the breasts and legs face upwards, and season with a teaspoon of paprika, a quarter teaspoon each of turmeric and sugar, half a teaspoon of salt, a lot of black pepper and one and a half tablespoons of lemon juice.

Tuck a large peeled and quartered onion in around the chicken, turn the heat to low, cover the pan with a lid or baking tray or something like that, and leave it to cook. The idea is that the chicken should cook and steam slowly in its own juices, but it might be necessary to help it along a bit with a splash of water every now and again.

You could just let the chicken do its thing for an hour and a half, and it’d be just superb like that, but there’s also the opportunity to bulk it out a little for hardly any extra effort, so why not?

Peel, and cut about 750g of potatoes into 2cm dice, and fry them in sunflower oil until golden brown and crisp. Give the drained potatoes a good seasoning of salt. Also fry twenty-five cloves of garlic, unpeeled, in the same oil and add both the garlic and potatoes to the chicken after its been cooking for about an hour, so that they get half an hour in the pan with the chicken.

The chicken will fall off the bone when it’s ready. Serve it garnished with some parsley and with more lemon squeezed over the top.

One pan, no stress cooking.

This is from Yotam Ottolenghi and Sami Tamimi’s majestic book, Jerusalem