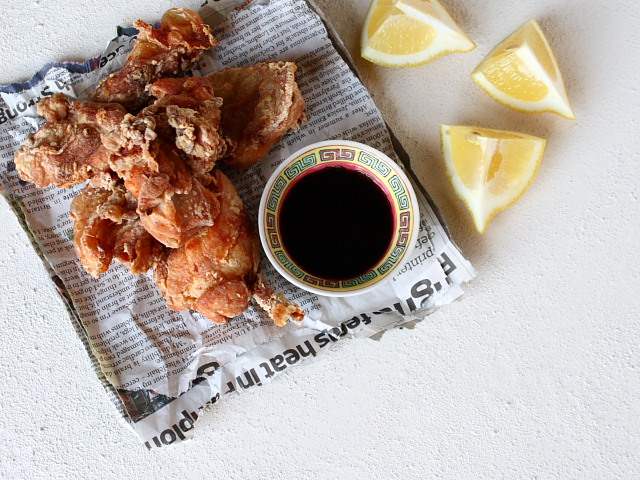 Japanese cuisine is at once alien and very familiar.

For every sashimi dish of raw fish, there’s something else much more recognisable to the Western palette, such as this, karaage, or Japan’s take on deep-fried chicken.

Karaage is a world away from something like an American southern fried chicken dish…it has a delicate elegance in place of the American versions bombastic brashness.  Neither is better, neither is worse, but there’s a striking simplicity about karaage, about the way in which the flavours of soy and ginger and garlic work together to flavour the meat in a strikingly Japanese way.

There’s nothing to this recipe.  A little chopping, a little waiting and a little cooking. Effort is tiny compared to the end results.

Chicken breast is too dry for this type of treatment – go for chicken thigh, instead, boned out, skin left on and chopped into bite-sized pieces.  You should get four or five chunks per thigh, and you’ll need about six or so thighs in total to serve two hungry people or three or four as a light meal.

Place the chicken pieces into a large bowl and add a crushed clove of garlic, a grated thumb-sized piece of ginger, four or five tablespoons of Japanese soy sauce, a couple of tablespoons of sake and a drop of sesame oil and mix the whole lot together until the chicken is coated well.

Cover, and refrigerate for a few hours, so that the flavours penetrate the meat and infuse it with the taste of Japan.

When you’re ready to cook, heat a deep fryer to about 180c and pat the chicken pieces dry on kitchen paper or tea towel.

Dredge the chicken in cornflour seasoned with a little salt and white pepper and drop it, piece by piece, into the hot oil.  Cook for a few minutes until the chicken is golden and crisp.

Cornflour will give a very crisp and crackly coating, but for a softer crust, potato flour will work.

Serve the karaage immediately, with rice.  It’s best when it’s fresh and hot, but curiously, is also utterly superb cold and refrigerated, but it’s really hard to see how it will ever get to that stage.

Karaage tends to get eaten quickly.

This recipe is from this blog post, possibly one of the loveliest things you’ll ever read on a food blog.  I can only aspire to write as well as that.