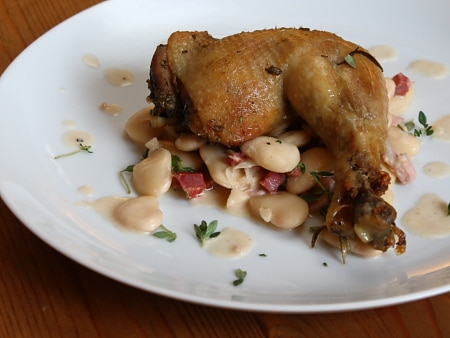 There’s no reason for confit to be saved just for duck legs.

You can confit just about any meat in the same way – all you’re doing is cooking meat slowly in fat.  I’ve previously tried rabbit with great success, and these chicken legs are another excellent alternative.

Confitting is a two stage process – salting and mild curing followed by long, slow cooking in fat.  It sounds complicated, but it’s very straightforward, and the basic method holds true for whatever meat you’re using.

Start by mixing a dry brine mixture of two tablespoons of salt, two teaspoons of ground black pepper, ten roughly chopped sage leaves. the coarsely chopped leaves of four big sprigs of rosemary and a whole head of garlic, peeled and roughly chopped.  Yes, that is a lot of garlic, and there’s more to come.

Rub the dry brine mix over four free range or organic chicken legs, cover with clingfilm and leave in the fridge overnight.

The next day, take the chicken out of the fridge and brush off any excess salt before arranging the legs in a deep, heavy pan.  Cover the meat with vegetable oil – you may need up to two litres – and add another bulb of garlic, sliced straight across into two halves, along with a tablespoon of salt and five or six sprigs each of rosemary and thyme.

Put the pan in the oven and cook at 150c for a good two to two and a half hours, until the meat is very tender but not completely disintegrating. Turn the legs over half way through, and make sure they’re completely covered by the oil.

The accompanying bean stew only takes about a quarter of an hour to prepare, so leave it until the last minute.

Start by chopping 100g of chorizo sausage into small dice and frying them in a pan until browned.

Remove the sausage to a plate and add 100ml each of chicken stock and double cream. Turn the heat up to medium high and let the cream and stock simmer until it’s reduced by about a half.

Tip the chorizo back into the pan, along with 220g of tinned butter beans, drained and rinsed.  Cook for about ten minutes until the sauce has thickened a little and the beans are warmed through.

Season with salt, pepper and the leaves of three sprigs of thyme.  The thyme is vital.  It gives the beans a real edge.

To serve, quickly flash fry the chicken legs in melted butter in a hot frying pan to give them some colour, and serve on top of a couple of spoonfuls of the bean stew.

The confit will keep in the fridge as long as it’s completely covered in the oil, so you could prepare the chicken a few days in advance.  If you do this, the best way to heat the chicken through again and to brown it at the same time is to blast it for twenty minutes in a hot oven.

This recipe is from Jason Atherton’s Gourmet Meals for a Fiver.