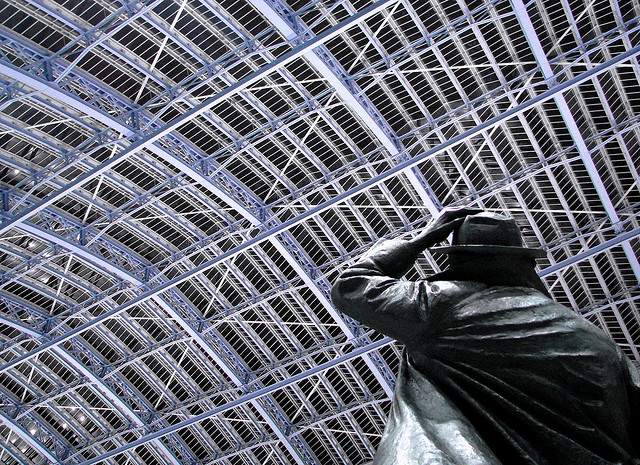 “Beyond the throb of the engines is the throbbing heart of all.”
John Betjemen

St. Pancras station in London is quite the most amazing space, a vast vaulted ceiling headed by a gold clock, set high above a fleet of sleek Eurostar trains.

The station dodged the Luftwaffe’s bombs, but fell out of favour during the Sixties rush to sleek modernism.  Somehow, it survived, a dirty and half derelict relic from another age.

Then came the Eurostar.

The Victorian soot was sandblasted off the red bricks, the ceiling repaired and re-architected, the lower concourse – once a store for Northern beer barrels as they arrived in the capital – renovated as a retail space and international departure lounge.

St. Pancras captured the old, lost romance of the railway, and was reborn.

The upper concourse has an oyster and champagne bar, part of a larger restaurant.  Travellers sit with their bags and their stories sipping champagne as John Betjeman, poet laureate and St Pancras’ champion in its darkest days, immortalised in bronze, gazes shambolically skywards, astounded by the grandeur and scale of the roof.

The St. Pancras Grand serves a solidly British menu, as if to challenge the French people disembarking from the train at their own game.

Kidneys sauteed in butter and served on toast with a red wine reduction.  Kedgeree, with smoked haddock, egg and fresh peas, the rice retaining its bite, flavoured with the mellow whiff of the Empire – a bowl of warming, satisfying food, loaded with history.  Blackberry and apple crumble, as essentially English as any pudding could ever be,  with ice-cream, flecked with black specks of vanilla, melting slowly into the big, rustic crumb topping.  A glass of champagne at the side, an excellent ximenez sherry later.

Betjeman would have been amazed and delighted at what’s become of his favourite station.

Photo courtesy of Richard Gunn.  Many thanks for graciously allowing me to use it. See more of Richard’s excellent shots in his Flickr photostream.