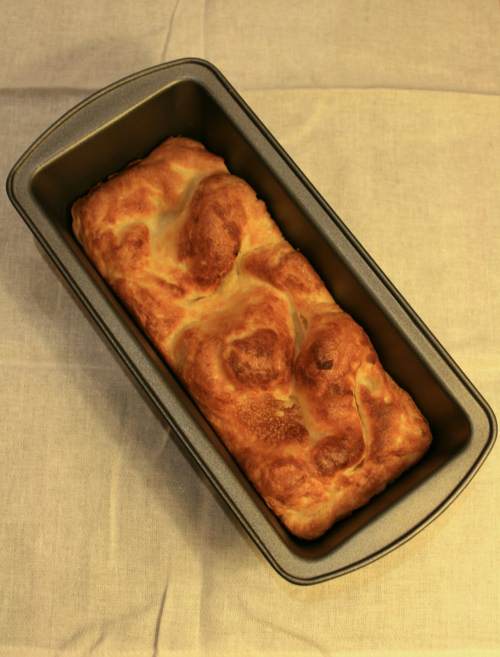 My mum used to make the best Yorkshire puddings I’ve ever eaten.

This is not an uncommon claim for somebody from Yorkshire to make about their mum’s cooking, and each claimant will argue their particular corner forever. They’re all wrong. My mum’s were the best. Crunchy around the edge and a bit soft in the middle. Perfect.

The secret to Yorkshire pudding perfection lay in an old brown cup from the early Seventies that had a broken handle. This was mum’s Yorkshire pudding cup, the one she used to measure out the exact amount of flour and milk needed to make a decent pudding. We thought the cup had some sort of magical properties, which I still kind of believe it had, but the truth is that the proportions were just right for making Yorkshire pudding batter.

There were other secrets too. The fat had to be lard, and it had to be smoking hot. Bread tins were the only container used (none of these trays with the little round holes in them. Ridiculous) and the tins were filled on the racks of the oven, quickly, to keep the oven hot. The oven was a gas oven that seemed to have a top temperature equivalent to the centre of the sun. All of these details are important. Missing any one of them puts you on shaky Yorkshire pudding making ground.

Which leaves me on very, very uncertain ground indeed, with only an electric oven at my disposal and without the magic cup. I need to take my tins out and blast them on the hob to get the fat hot enough. This is not good enough. I think the cup has been stolen by my sister, and I’ll be searching her kitchen when I visit next. You’d better hide that cup if you want to keep it, my girl.

Making the batter is easy. Sift 75g of plain flour into a large bowl, make a well in the centre and break in a large egg. Slowly add 75ml of semi-skimmed milk mixed with 55ml of water, whisking all the time. Make sure you get all the little bits at the side of the bowl. It’s as simple as that.

Whilst this is going on, the oven should be pre-heating to a volcanic temperature. Anywhere North of 220c will do the job. In the oven, as it heats up, should be a couple of metal bread tins with a good slice of lard in each. Don’t try to use vegetable, olive or any other kind of oil. Only lard will do, or dripping at a push. This will not be healthy.

When the oven is hot, quickly open the oven door and take the tins out, placing them on a high flame on the top of the hob. When the fat in the tins is smoking, pour the batter in, not too much in each tin, just a thick slick in the bottom. Put the tins back in the oven and shut the door straight away. This operation should take just a few seconds and it’s worthwhile thinking it through properly beforehand. Make sure the batter is in a jug that you can easily pour from, and have oven gloves ready.

The temptation to open the door and have a look will be great, but must be resisted. The length of cooking time will vary with the size of the tins. A small pudding will be done in ten or fifteen minutes, a large one could take double that.

Yorkshire puddings cannot be kept waiting – they must be eaten immediately, so time things so that everything else is ready for the moment the oven door is opened. I find that larger puddings don’t rise as high as smaller ones, but this doesn’t really matter.

Traditionally, Yorkshire puddings were cooked under a roasting joint of meat, and were given to the children to fill them up, leaving more of the meat for the adults.

Tonight, the kids did get some Yorkshire pudding, but not until I’d had the first taste, and we ate our puddings with a fantastic piece of brisket that had been cooking all day in a slow cooker with carrots, onions, leeks and celery, a dash of Worcester sauce and a bottle of Guinness. Any other day, this would have been the subject of a post itself, but not today.