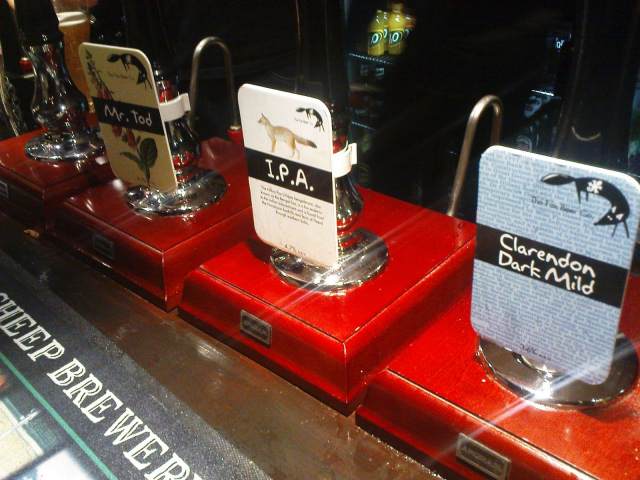 The Fox & Newt has been brewing it’s own beer under the Fox Brewery flag since the start of the year, and has gained a steady reputation for some excellent and inventive brews.

Three Fox Brewery beers were on tap this weekend, with a few more listed as ‘sold out’ or ‘coming soon’ on what seemed to be a rapidly changing blackboard. The three on tap were a lovely dark mild, Clarendon, which was extremely smooth and drinkable, a superb IPA and Mr.Tod, a solid bitter. The general consensus was that the Clarendon was the pick of the bunch – a classic pint of mild, dark, smooth and a bit luxurious.

The Fox & Newt is a little off the beaten track, opposite Park Lane College and about ten minutes walk from the middle of town, but it’s worth the detour. A friendly, welcoming and very relaxed pub with staff who are clearly dedicated to their trade. They’ve got a very nice fireplace, too.

The Fox Brewery’s Nightshade has been spoken of enthusiastically, but wasn’t on. Demand outstrips supply, which would tend to imply that it’s a decent beer. One for next time.

The Fox & Newt is an important pub because it’s a brewpub, and there are precious few of those left in Yorkshire. Of course, we’ve got our fair share, more than our fair share in fact, of micro and small breweries, but The Fox is in another league entirely, and it’s virtually on it’s own – a micro, micro brewery, as small as it could realistically get, which in a world of huge brands and homogeneous beer is a great place to be. No bad thing, really.

Footnote: it would be rude not to credit Leigh at The Good Stuff for his great posts about The Fox & Newt, seeing as they led me there in the first place. Many thanks and good work.