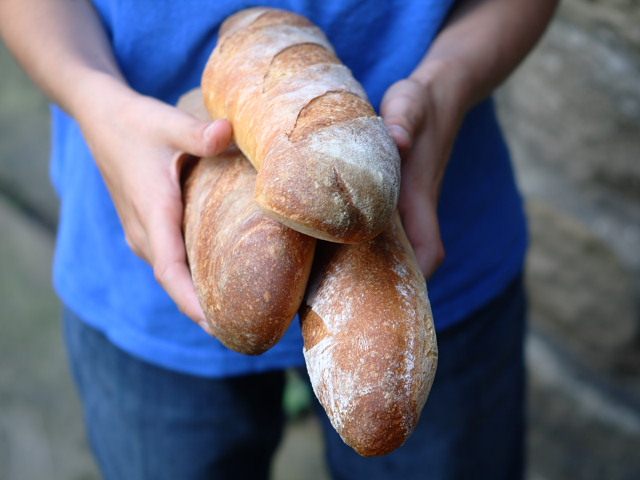 There’s little more evocative of France, more French in itself, than the baguette.

The sight of people walking quickly home before breakfast, a still-warm baguette tucked firmly under their arm is a common one, such is the baguette’s place in French life.

There’s tradition involved – no French meal is truly complete without bread – but above that, the baguette is a remarkably practical bread.  Tough, versatile, portable and with a place on just about every French table.

Making your own baguettes is fairly straightforward, especially if you’ve made the odd loaf or two before.  Some of the techniques are different, and you need a gentle hand to help to preserve that all-important open texture, but there’s no mystery to it.  The only real compromise you need to make is on the length…not many people have an oven big enough to bake a full-size baguette, so homemade versions have to be shorter out of necessity.

The only other word of caution is that this particular recipe takes ages to make.

It’s a two-day job, but the time is an important part of the method.

The recipe is from Peter Reinhart’s Artisan Breads Every Day

, and it uses Reinhart’s cold fermentation method.  This means that the dough is allowed to develop very slowly overnight in the refrigerator, and it’s this period of slow growth that gives the finished bread a superb taste and wonderful lightness.

It’s worth the wait.

A mixer will also help, and cuts the mess and involved time in half.  The rest of the time is spent simply waiting.

Weigh 680g of strong white flour, 14g of salt, 7g of instant yeast and 454ml of lukewarm water into the mixer’s bowl, and mix on the lowest speed for a minute to draw the ingredients together into a rough dough.  Use the normal paddle attachment for this, and then switch to the dough hook and let the mixer ‘knead’ the dough on a medium-low setting for two more minutes.

Tip the dough onto a lightly floured work surface and knead by hand for a minute to finish.  The dough should be tacky, but not too wet or sticky.

You can, of course, do all of this by hand, a mixer just makes it easier.

Transfer the dough to a lightly oiled bowl and cover with cling film.  Refrigerate overnight.

The dough will stay in this state for up to four days, so there’s no rush in baking your finished bread.

Gently tip the dough out onto a floured work surface, and slice it into four equal chunks.

To form a baguette, pat a portion of the dough into a thick rectangle, and then lift the bottom edge up into the centre, sealing the seam with your fingers.  Next, pull the top edge of the rectangle down over the new seam, right to the bottom and again seal it with your fingers or the side of your hand.  The overlapped dough should have a tight, drum-like skin to it.

At this point, you’ve got a batard, and you could just leave it at that, but the baguette is just a couple of steps away.

Leave the formed batards for ten minutes to rest, and then simply repeat the earlier operation, lifting the bottom edge into the middle and then overlapping the top edge before finally rolling the dough back and forth with your hands, as if it were a rolling-pin, until the baguette rolls out to the length you want.

Lift each baguette onto a lightly floured baking tray, cover with a floured tea towel and leave to prove.

The whole operation from removing the dough from the fridge to putting it in the oven should take no less than two hours, so that the dough has a chance to wake up and spring into life.  I found that I left my baguette’s to prove for about an hour and a half.

To get a good crust, there needs to be heat…a lot of heat, so get the oven on in plenty of time, at the hottest possible setting.  It could take half an hour or more to warm up properly, and you don’t want to be caught with a cold oven.

Another factor in forming a good crust is steam, so place a shallow tray on the very bottom of the oven and let it heat through as the oven warms.

When everything is ready, slash each baguette diagonally three times to a depth of about half an inch, slide the baking trays into the oven, pour a cup of hot water into the tray at the bottom for an explosive blast of steam and shut the door as quickly as possible.

Cool on a wire rack for at least three-quarters of an hour before eating.