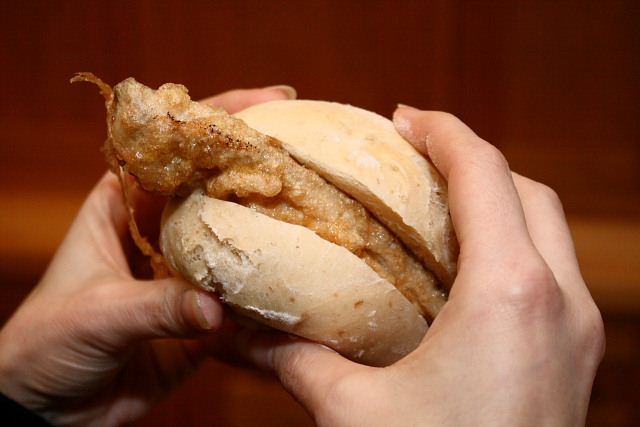 As part of his Fish Fight, Hugh Fearnley-Whittingstall is encouraging us to eat a more diverse range of fish, and there’s one cheap, sustainable, nutritious and extremely tasty species right at the front of the pack.

Criminally under-valued, mackerel is nothing short of a show-stopper.

Packed with all the right types of fish oil and minerals, it’s plentiful in British waters, easy to catch and it’s quality belies the meager price you’ll pay for it.

Hugh’s big idea is to get mackerel on the menu at the local fish and chip shop, next to cod and haddock.  Maybe it could just supplant the major disappointment that is plaice or the abomination of the battered sausage?

In the affection of the chip shop frequenting British public (that’s all of us, non-Brits), cod and haddock reign supreme, with only minor regional swings between the two giants of the white fish world.

In West Yorkshire, it’s haddock all the way, skinned, please.

This might be Hugh’s biggest problem.  When we think of fish and chips, we think of a big piece of white fish.  Anything else, and I feel cheated.

But setting that aside, what about mackerel?

I decided to have a go myself.

Hugh’s recipe is so simple it isn’t really a recipe, more of a method – dust an un-skinned, pin boned mackerel fillet in seasoned flour, dip it thoroughly in beaten egg and then deep fry for just a couple of minutes until the fillet turns golden and floats to the top of the oil.

Drain the oil from the fillet and serve in a floury bap with tartare sauce, or at a pinch, some mayonnaise perked up with a little lemon juice.

And is it any good?

Yes, it’s incredible.  Mackerel has a depth of flavour that’s missing from most white fish, it’s a gutsy contender whose taste isn’t swamped by the light-as-air-almost-batter that Hugh recommends.  The combination of sweet, oily mackerel and light, floury bread is a complete revelation.

Would I buy it from a fish and chip shop?

Yes, I think I probably would.  The proof is in the eating, and I’m a convert.

Speak to your local chippy and get behind the Mackerel Mission

There’s a lot in it for them:

The method I’ve described above is ludicrously easy, but here’s a film from the Fish Fight website that steps through it and proves the point:

How Not to Get Fat – Your Daily Diet, by Ian Marber
Why are perfectly good fish thrown back into the sea, dead?