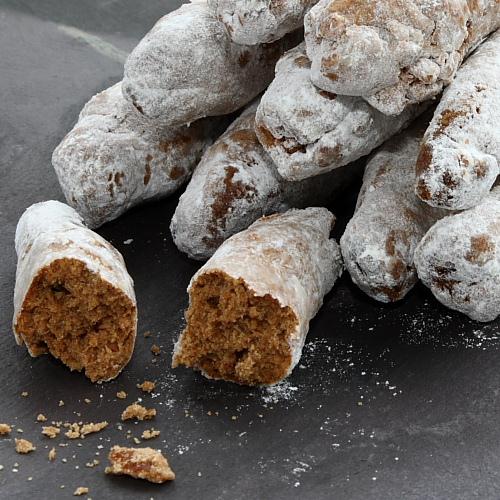 The coincidence of a week in Barcelona and a publisher sending me a copy of Frank Camorra’s staggering Movida Rustica cookbook has left me cooking a lot of Spanish food.

I make no apologies for this, but warn that it may continue for a while yet.

These biscuits, alfajores, are a throw back to the Moorish settlement of Spain.  They’re a typically Arabic sweetmeat, famous in Andalusia, and most prominently, in Cadiz.  There are many variations across the Spanish world, but the basic alfajore consists of flour, honey, almonds and spices.

When the flour and almonds have cooled a little, tip the flour into a mixing bowl and process the nuts in a food processor or blender until they’re fairly finely chopped.

Add the toasted flour to the food processor and mix it into the almonds, then add 125g of unsalted butter, chopped into small chunks and pulse it into the flour until the butter is completely rubbed in.

Add 160g of finely chopped dried figs, 60g of sultanas, 100ml of honey, the zest of half a lemon, the heads of ten cloves, ground up finely and half a teaspoon of ground cinnamon.  Mix the fruit and spices in well and bring the mixture together with 20ml of Pedro Ximenez sherry.  The dough should be soft, and will need setting to one side for half an hour to rest and toughen up a bit.

When the dough has rested, divide it into thirty pieces.  If you’re stupid, like me, you’ll start to hack off pieces of dough wondering how the hell you’re going to ever get thirty roughly even pieces, before realising that you should have just cut the whole piece into three, then each of the three pieces into two and each of those pieces into five, which is much easier overall.  But don’t do as I say, do as I do and get hacking.

Roll each of the pieces of dough out into eight centimetre cylinders until they look like short cigars.

Place the alfajores on a floured tray and bake in a 180c oven for fifteen minutes.

To finish, and whilst they’re still warm, roll each of the biscuits in icing sugar, so that they’re completely covered.

Alfajores are great with coffee, but they’re even better with a dark and nutty oloroso sherry.

Leave a Reply to Magic of Spice Cancel reply

Ametilles Garapinyades, or sugared almonds
Should the Food Standards Agency be scrapped?